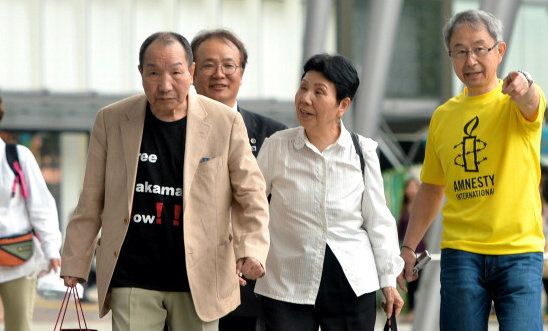 Hakamada is 78. He holds the record for being the world's longest-serving death row prisoner. He is temporarily released and awaiting a retrial in Japan.

On 27 March 2014 - an incredible 48 years after he was first imprisoned - Hakamada was temporarily released from Japan's death row and solitary confinement, as Shizuoka District Court granted him a retrial based on new DNA evidence. Sadly, his prosecution have decided to challenge the District Court's decision to retry him - they lodged an appeal against the retrial on Monday 31 March.

Hakamada is, for the first time in nearly half a century, experiencing life outside of a detention centre. He has serious mental health problems after his time on death row, having spent the previous 46 years awaiting execution every single day; Japan gives its prisoners no forewarning of their execution - many find out just minutes before they are hanged.

Thank you to the nearly 22,000 of you who signed our petition calling on prosecutors to drop their appeal against his retrial. We hope that soon Hakamada may experience justice that is nearly half a century overdue.

The back story: Hakamada's case

There are many reasons that Hakamda should be granted a retrial.

In 1966 Hakamada was a factory worker in his thirties living in Shimizu, a city in the Shizuoka Prefecture on Japan's Honshu Island. He'd not long retired from a career as a featherweight boxing champion (he had ranked sixth in Japan) and was working for a miso-producing factory, when he was arrested over the suspicious deaths of a family of four. The manager of the factory where Hakamada worked had been murdered along with his wife and two children. The family was robbed, their bodies left in the house, and the house set alight.

The finger was pointed at Hakamada, and on 18 August 1966 he was arrested and detained in a police cell. He has never left custody since.

Hakamada was interrogated for 20 days with no lawyer present. The confession Hakamada signed at the end of his detention would form the basis of his conviction.

Later, Hakamada retracted his statement, claiming that police had coerced him into signing it after nearly three weeks of intensive interrogation, where he says he was beaten, threatened and forced to confess.

Hakamada was brought before Shizuoka District Court on 11 September 1968. In the courtroom, Hakamada retracted the confession obtained by police during his detention.

The evidence was questionable: of 45 documents presented by the prosecution as signed confessions by Hakamada, only one was accepted by the judges as being legitimately signed by Hakamada in free will; the other 44 were dismissed. Despite this, he was found guilty of the four murders and sentenced to death.

Judge at Hakamada's trial believes he is innocent

'Since I had convicted him, I felt extremely guilty that I had to sentence an innocent man. I still do, to this day.'
Kumamoto Norimichi, Hakamada's judge

Kumamoto Norimichi was one of three judges on Hakamada’s case. He was appointed to be the main associate judge who wrote the final sentence. During the trial, he did not believe there was enough evidence to convict Hakamada of the murders.

'Looking at the evidence, there was almost nothing but the confession, and that had been taken under intense interrogation.'

His decision haunted Kumamoto: 'I could not bear the burden of conscience so six months later I had to resign as a judge.'

Forty years later, Kumamoto spoke about Hakamada’s case to the UN. He still maintains that Hakamada is innocent, and believes that he should not have been sentenced to death on such scant evidence.

'In cases where strong doubts exists over the guilt or innocence… If the prisoner is executed, the damage cannot be reversed.'
Kumamoto Norimichi

Not enough evidence to execute

International laws around use of the death penalty make it clear that anyone sentenced to death must have received a thorough and fair trial with undisputed evidence for their conviction.

‘Capital punishment may be imposed only when the guilt of the person charged is based upon clear and convincing evidence leaving no room for an alternative explanation of the facts.’
UN Economic and Social Council (ECOSOC) Resolution 1984/50