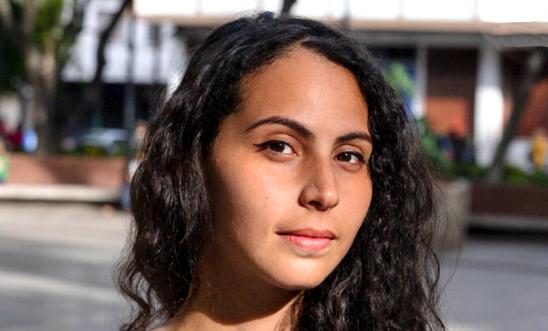 Sutton Amnesty were honoured to have Geraldine Chacón speak to the group. Geraldine is a lawyer, human rights advocate and ex-prisoner of conscience from Venezuela. She gave a very powerful and moving testimony of her own personal experiences of human rights violations in her own country.

Geraldine always wanted to defend other people. Aged nine she dreamed of being a lawyer. At age 14, she participated in local city youth government. From 2010 Geraldine attended the Universidad Metropolitana (Metropolitan University) where she pursued a law degree. Her academic work included the study of 19th century etiquette and citizenship manuals for young people, written by Colombian author Pío del Castillo. She was an exchange student at the Institut d'Etudes Politiques de Paris (Sciences Po) in Paris, France in 2013–2014.
She returned to the Metropolitan University to complete her law degree and study Liberal Studies. She was a student in that program at the time of her arrest. On 9 April 2018, the Academic Council of the Metropolitan University published a statement in her support. She could not attend graduation to receive her law degree because she was in prison. Geraldine worked as a litigation and court assistant in a legal firm, and as of 2016 in the Legal Consultancy for the Central Bank of Venezuela.

In 2012, Geraldine was the founder of the Amnesty International Venezuela Network at the Universidad Metropolitana (UNIMET Network). In addition, she served as director of her university's newspaper Naranja Pelada (The Peeled Orange). Geraldine also worked as a volunteer with the Latin American nonprofit organisation Un Techo para mi País, whose goal is to provide safe housing.

Around 2015, as part of her community service while at university, Geraldine began to volunteer with the Community Ambassadors Foundation (Fundación Embajadores Comunitarios, FEC), an NGO founded in 2008 by university students to empower and support youth from vulnerable communities in Caracas. After completing her service requirements, she continued to work with the organisation, eventually becoming one of its directors. ‘Any injustice she saw, she fought against,’ says her mother.

In the early hours of the morning of 1 February 2018, Geraldine, then 24 years old, was arrested at her home in Caracas by armed officers of the Bolivarian National Intelligence Service (Servicio Bolivariano de Inteligencia Nacional, SEBIN). The officers had no arrest warrants and acted under false pretences. She was taken to El Helicoide for questioning and detained there. Legal orders for her release, issued by the Venezuelan judicial system, were ignored by the prison authorities. The arrests were part of a widespread crackdown on government critics and human rights activists.

Geraldine was held in a cell with 25 women, with little or no access to drinking water, clean clothes, sanitary facilities, medicines or other medical services. She was not allowed to go outside in the sunlight, to see family members or to see her lawyers. Information on her condition was available only indirectly through reports from people who managed to visit their relatives in the same cell as Geraldine. It was left to her mother, Natividad Villarroel, to attempt to supply her with 15 litres of water a week, medicines and personal hygiene items. There was concern that the "conditions of detention could constitute torture or cruel, inhuman or degrading treatment".

Geraldine was declared a prisoner of conscience by Amnesty International, who issued an urgent action calling for her immediate and unconditional release on 27 April 2018. On 18 May 2018, Geraldine was one of 18 women who went on a hunger strike.

Geraldine spent four months in prison before being finally conditionally released on 1 June 2018, one of a group of 87 political prisoners released at that time. However her case has not been formally closed by the Venezuelan authorities, placing her at risk of re-imprisonment if she returns to her home country.

Geraldine told us she was very grateful for the huge number of messages of solidarity she’s received from Amnesty members and groups worldwide.  “I’ve campaigned for Write for Rights cases before,” said Geraldine. “I never imagined I’d be on the other side of the campaign. I have no words to thank all that Amnesty has done for me.” People wrote thousands of letters in support of her in Amnesty’s 2018 campaign, and she had this to say about what they meant to her: “A letter has the power to turn a bad day into a happy day.”

One Sutton group member said afterwards, “the things that stuck in my mind were Geraldine’s incomprehension when arrested (and subsequently), the idea that the experience never leaves you even after the 'victory' of release, the buzz which went round the prison when it was discovered she had been adopted by Amnesty and Geraldine's advice (of which her talk was full testimony) to never forget the human side.”

Before closing, Geraldine drew the group’s attention to the case of Javier Tarazona (Venezuela), a colleague of hers who is still in prison. Members were encouraged to send letters to the Venezuelan president and to the ambassador to the UK, Mrs Rocío Maneiro.

The group played a short video clip of Gustavo Dudamel and the Sinfónica Simón Bolívar Orchestra playing Mambo, as a token of our appreciation for Geraldine speaking to us so movingly.

Various letters on our prisoner of conscience, Dr Mohammed al-Roken, were circulated to the group - most can be emailed.
There is a petition that can be signed, forwarded to the group by Simone Theiss, who spoke at our October meeting. Please sign and encourage others to do so. The Dubai Expo runs until 31 March 2022, so the petition should still be current.

Three new members were welcomed to the meeting. These were as a result of October’s two recruitment email-shots, one to our ‘long’ e-mail list, and the other to National AI members and supporters with postcodes beginning SM, and who are resident in the Sutton catchment area.