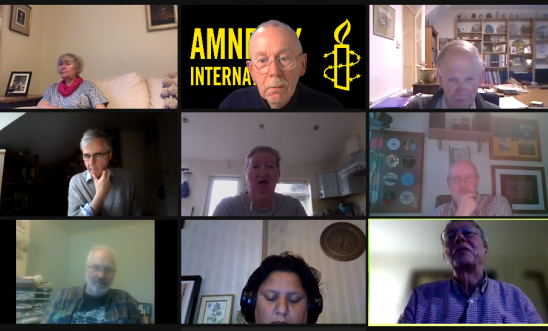 We were delighted to have Barrie Hay, Amnesty UK Regional Coordinator for the countries in the former Soviet Union, speak to us at our June group meeting.

Barrie introduced himself as an Amnesty member of 40 years' standing and a Country Coordinator for the last 15 years. He planned to talk primarily about Russia, but touching also Belarus and Ukraine.

The 'former Soviet Union' area, for which he was the Regional Co-ordinator comprised four different groupings each with their own country coordinators as follows:

Barrie started his talk by covering developments in Russia. The enormity (and complexity) of Russia can be illustrated by the eleven time zones it occupies.

Russia has become increasingly brutal in its treatment of those who oppose Putin with poisonings of Alexander Litvinenko and Sergei Skripal in the UK and also the high profile opposition leader Alexei Navalny. Russia has not accepted any responsibility for these. In addition journalists such as Anna Politkovskaya and Natalya Estemirova and the opposition leader  Boris Nemstov have all been murdered.

Recently there have been restrictions on Freedom of Assembly (who/when/where you can meet) with offences punishable by sanctions/civil lawsuits/violent dispersal and convictions following unfair trials.

Organisations such as Memorial (whose main purposes were to monitor human rights abuses and bring before the public the details of events during Stalin's purges) have been closed down. The offices of Amnesty and Human Rights Watch in Moscow have both been closed down.

Barrie went through a number of individual cases:

Alexander Navalny - Opposition leader forbidden to stand at the 2018 elections. Poisoned on the way back from Siberia he managed to reach Germany where he received potentially life-saving treatment. On returning to Russia he was arrested, faced unfair charges and given an additional nine year sentence. His appeal was rejected and (subsequent to the June meeting) he has been transferred to a high-security prison.

Elena Milashina - a journalist who has exposed human rights violations in Chechnya and been subject to attacks, death threats and intimidation. With other journalists murdered there is increasing concern for her safety. We will send a petition around on her behalf.

Yulia Tsvetkova - an artist and stage director whose case the Sutton Group have covered who faces six years in prison for defending women's and LGBT rights.

Belarus is led by Alexander Lukashenka who proudly claims to be Europe's last dictator. Belarus is the only European country to retain the death penalty and the reasons for which it can be applied have now been extended to include 'being a traitor'. Since the elections in 2020 there has been a significant crackdown on protests with the authorities having arrested thousands, many of whom have been subject to abuse and torture. Opposition leaders have been exiled or jailed.

He mentioned Marta Rabkova whom Sutton Amnesty have also covered. She has been a volunteer coordinator for Viasna Human Rights Centre in Minsk and documented human rights abuses in Belarus. She current faces the possibility of 20 years in prison for her work.

Amnesty has already documented cases of unlawful killing in the northwest of Kyiv oblast following the invasion by Russia. More cases of abuse are expected to emerge.

On arguably, a lighter note but also illustrating the nature of protest and consequent confusion of the police, Barrie shared a photograph of a young man doing nothing but holding a blank piece of paper yet appearing to be arrested.

Our chair reported that Amnesty Sutton's '100 letters and emails' campaign to the UAE embassy in London had almost finished.

Our group was now coordinating with Amnesty groups from Liverpool, Manchester, Reading, St Albans and Westminster & Bayswater on a national basis led by Paul Dawson (Amnesty regional coordinator for the Middle East and Gulf areas). A call took place on 1 June with the next one scheduled for 29 June.

Paul Dawson has confirmed that Dr al-Roken's sentence should come to an end on 17 July 2022. However ten of the 'UAE 94' prosecuted collectively had already passed their scheduled release date but remained imprisoned.

The UAE justify these 'extended terms' by reference to a counter-terrorism law which provides for people 'adopting extremist or terrorist thought' to be placed in 'counselling centres'. In practice those affected have continued to be held in the same prison.

The Sutton Group will attend a UAE Embassy demonstration in solidarity with the group's prisoner of conscience Dr Mohamed al-Roken at 6pm on 19 July at 1-2 Grosvenor Crescent, London SW1X 7EE

Our secretary went through three cases he had circulated:

The group have been busy running three letter-writing stalls during the month of June! These were: