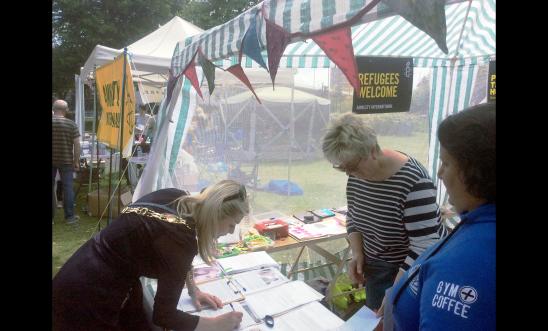 Sutton Amnesty have been busy running three letter-writing stalls during the month of June! These were:

Good contacts were also made with the teachers and students at Sutton High School for Girls, during their Human Rights Festival on the 14th, and as a result, we have an invitation to speak at the school this autumn.

All in all, the 3 stalls were a good test in resourcing all the materials we required, and for the newer volunteers to understand how an Amnesty letter-writing stall works. And to explain Amnesty’s work to the public. We plan to run similar stalls at the Carshalton EcoFair (August 29th) and the local Liberal Democrats conference (September 3rd).

Thanks to Anne, Mark, Paul, Siddhi, Clive, John, Graham and Lyndon for volunteering to run these stalls - and especially Barbara, who attended all 3  - much appreciated!