Write for Rights 2015 - lots of cards and letters sent! 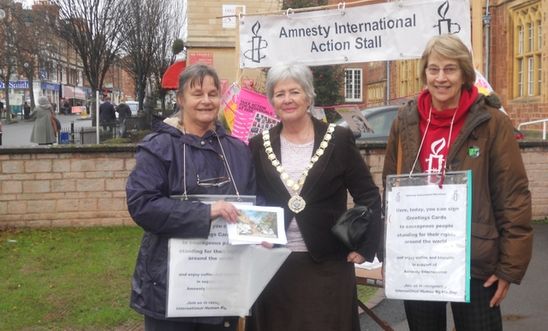 The 2015 Write for Rights Campaign went well here in West Somerset. We held a successful letter writing afternoon at the Reading Room in Minehead on Thursday 19 November, when 42 cards and letters were written and sent.  And on Friday 11 December we were at the Avenue Methodist Church in Minehead for a coffee morning, where more letter-writing and card-signing took place. Here we collected more than 40 signatures for each of seven cases featured in this year's campaign. One our visitors was the Mayor of Minehead, Councillor Jean Parbrook, who signed letters and consented to us taking photos for the local papers.

We also signed cards and letters for Eskinder Nega and Andy Tsege, imprisoned in Ethiopia. And we were really pleased to hear that the UK ambassador in Addis Ababa had been able to visit Andy, a UK citizen, and take him some of our cards. The ambassador said 'I showed him the cards from well-wishers in Minehead to demonstrate there were many people thinking about him and offering their support. This did seem to raise his spirits'. It encouraged us too!