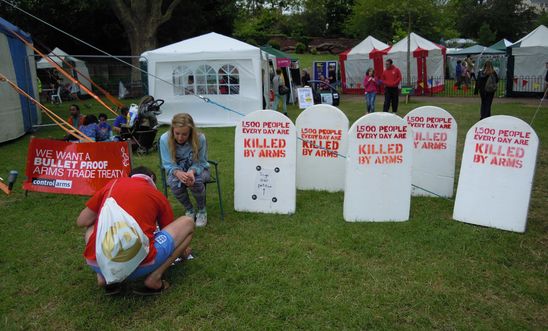 We were determined to make our presence felt to the 17,000 visitors who poured in through the gates of Belmont Park last Saturday and Sunday,

by joining forces with Oxfam, the Oxfam university student group and the Amnesty International university student group to maximise public awareness of the importance of negotiating a strong Arms Trade Treaty at the UN this coming July. We were allowed to locate the five tombstones (which received much praise!) close to the main musical tent – so people avoided tripping over the guy ropes – to gather petitions and direct those interested to our neighbouring AI and Oxfam stalls for further information. A total of 388 people signed the petition and their names have now been added to the signatures being collected across the UK for delivery to the Foreign Office on 27 June. Meanwhile, the AI stall itself was attracting huge interest thanks to the side door of a car which people were invited to sit behind to have their photos taken in support of Saudi women's right to drive.