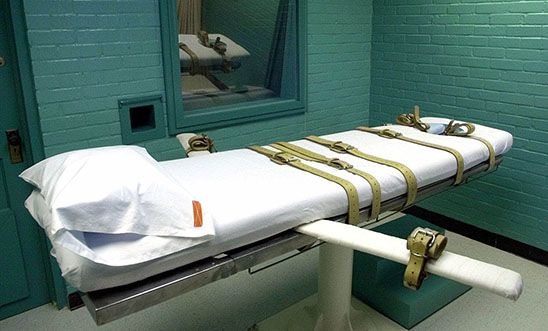 The US state of Arkansas executed four men in the space of a week in April 2017, taking a huge step backwards for death penalty use in the state – before April, Arkansas hadn’t executed anyone for 12 years. It also represents a huge setback amid declining use of the death penalty in the US – last year was the first year in a decade that the US was not one of the world’s ‘top five’ executioners.

Meanwhile, four men who were due to be executed this month were given stays of execution. We continue to call for the state not to resort to executing these men in the future.

The Governor of Arkansas, Asa Hutchinson, originally scheduled eight men to be executed in the space of eleven days in April, in tandem with the state's supply of one of the drugs used in the lethal injection process expiring at the end of the month. He scheduled two executions per day — as if the justice system was a conveyor belt.

Hutchison said that the executions were scheduled so closely together because of uncertainties around the availability of one of the three chemicals used in the execution process.

Treating prisoners lives as if they were products with a ‘use by’ date is abhorrent. Rushing through executions on a conveyor belt simply because of an expiration date damages the dignity of all involved and gives a sickening image of Arkansas’ justice system. Rapid executions increase the risk of human error, and the drug they are rushing to use has already been shown to make prisoners die in agony.

Arkansas had not executed anyone for 12 years - executions were suspended during this time over legal challenges to the state’s lethal injection procedures. But on 20 April, the state took a huge step backwards when it executed Ledell Lee. Just days later, on 24 April, Marcel Williams and Jack Jones were executed in the first 'double execution' in the US for 16 years. A week after Ledell Lee’s execution, Kenneth Williams was also executed by lethal injection.

We had serious legal concerns regarding three of these cases – in addition to the human rights case not to execute.

In the case of Jack Jones, he should not have been executed as he was diagnosed as having bipolar disorder. Executing someone with a mental or intellectual disability violates international law. Jones was executed for murder committed in 1995. He voluntarily committed himself to hospital a few months before the crime, and during the month of the murder was diagnosed as ‘extremely bipolar’. Jones had previously attempted suicide multiple times; after one suicide attempt he was involuntarily committed to a psychiatric facility.

Two of the other men did not appear to have been given fair trials.

The lawyer representing Ledell Lee was drunk during his hearing; Ledell Lee’s next two lawyers twice filed petitions in ways that did not meet the court’s procedures and were referred for possible disciplinary proceedings as a result.

The jury at Marcel Williams’ trial did not hear any mitigating evidence about his childhood of severe abuse and trauma and the only judge that heard this evidence said that the death sentence should not stand.

Four men who were due to be executed during the fortnight have been granted stays of execution. This means that they have been allowed to reenter legal proceedings around their case – though the conditions and reasons differ from case to case.

Arkansas judges issued stays of execution for Bruce Ward and Don Davis, due to be executed on Monday 17 April, on grounds of mental disability. Execution warrants for both men have expired and they are no longer under imminent threat of execution.

Jason McGehee, due to be executed on 27 April, was issued a stay of execution after an Arkansas Parole Board recommended clemency. A fourth man, Stacey Johnson, was granted a stay so that DNA testing could be used to determine his innocence or guilt.

The human rights case to stop the executions

The death penalty is the ultimate denial of human rights, as it violates the right to life. It is also a cruel and inhumane punishment that may constitute torture.

We always oppose the death penalty in every case because it violates rights. The idea of lethal injection as a ‘humane’ form of execution is simply a myth. There have been numerous cases of ‘botched’ executions by lethal injection in the US in recent years, with prisoners failing to die quickly or ‘quietly’.