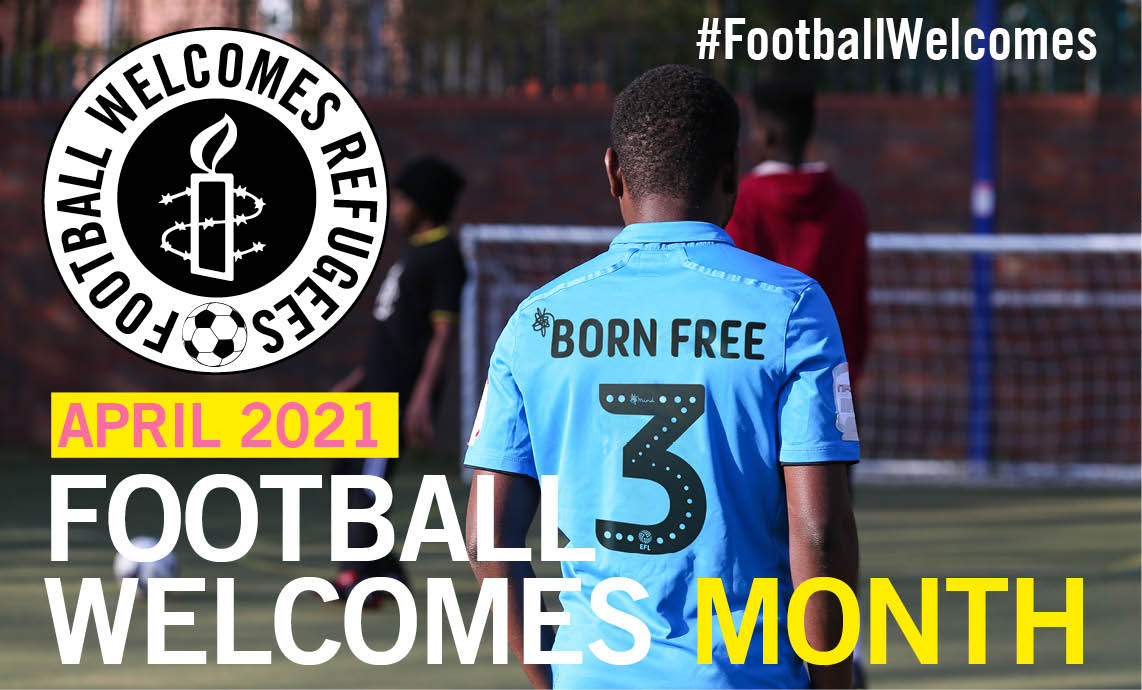 ⚽ What is Football Welcomes? ⚽

Our Football Welcomes programme celebrates the contribution players with a refugee background make to the beautiful game, and the positive role football can play in bringing people together and creating more welcoming communities.

Everyone wants to live in a place where they feel safe and welcome. For people fleeing conflict and persecution, football can play a hugely important role in helping to settle into a new country and culture, to make friends, learn the language and get to know the local area.

Football clubs are at the heart of many communities - they unite people on and off the pitch and give many a sense of belonging. Every April, football clubs across the UK come together to celebrate the contribution players from a refugee background make to the game.

From the children who fled the Spanish Civil War in the 1930s - who went on to become some of the first refugees to play professionally in the UK - to the likes of Dejan Lovren, Nadia Nadim and Victor Moses in recent years, refugee players have been making their mark on football for decades.

Throughout April, football club foundations from the Premier League, English Football League, Women’s Super League, Scottish Premiership and non-league and grassroots teams across the country put on events and activities to welcome refugees and people seeking asylum, and highlight the role that football can play in creating more welcoming communities.

Some offer free tickets to a game, some organise a match or tournament, arrange a stadium tour or player appearance. Others use our Football Welcomes Activity Pack in their work in schools, help to spread the word on social media, have first team players warming up in Football Welcomes t-shirts and feature Football Welcomes in their matchday programmes and local media.

"I was born in apartheid South Africa and I know how sport, including football, can help to bring people together and break down barriers. I’m really proud that Everton is taking part in Amnesty International’s Football Welcomes weekend." - Steven Pienaar, Former Everton winger

Football Welcomes began as a weekend of activities in 2017 with 30 clubs participating. By 2019, the number taking part reached almost 180, making it the biggest celebration of football and refugees the UK has ever seen. This included over half the Premier League, two-thirds of English Football League clubs and almost all of the Women’s National League teams. It continues to grow year by year, and is now celebrated throughout the month of April.

Delighted that @LCFC is taking part in @AmnestyUK’s #FootballWelcomes weekend. 160 clubs across the country saying #RefugeesWelcome. Great to see. ??

The aim of the project is to create a more welcoming environment through football, with local organisations working together to help refugees and people seeking asylum develop a sense of belonging as they settle into new communities.

The project is inspired by Germany’s Welcome to Football programme, and our partners have set up ‘community alliances’ with other local organisations including refugee groups, charities, fans’ groups, schools and others. They put on football sessions for women and men who are refugees or seeking asylum, support or offer English classes and training in coaching or refereeing, as well as providing the opportunity for people to make friends and connections and to feel part of the community.

... “Lots of people identify with football, wherever they are from and whatever their background. That’s why it’s so heartening to see the footballing community come together for a weekend of welcoming and supporting refugees.” #FootballWelcomes @AmnestyUK

This map shows the participating clubs. Did your team take part? ?

Football Welcomes is part of Amnesty International’s I Welcome campaign for a better international response to the global refugee crisis. The campaign encourages local communities to work together to create a more welcoming environment for people fleeing conflict and persecution.

Want to get your local football club involved? Find out how here.

Supported by the players of: