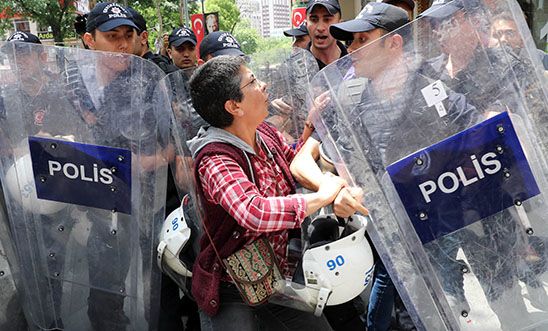 LGBTI+ activists are being forced underground, victims of sexual violence and other vulnerable groups have lost vital support, and citizens who peacefully express their views are being silenced as the Turkish government suffocates a once vibrant civil society, a new Amnesty report warns.

Weathering the storm: Defending human rights in Turkey’s climate of fear shows how measures like blanket bans on public gatherings and mass criminal investigations are stifling dissent throughout Turkish society.

’There is now a huge gap in the provision of advice and support to survivors. It really breaks my heart’
Zozan Özgökçe of the Van Women’s Association

Under the state of emergency launched after the attempted July 2016 coup, more than 1,300 NGOs have been permanently shut down, including organisations that supported survivors of sexual- and gender- based violence, displaced people, and children. ‘There is now a huge gap in the provision of advice and support to survivors. It really breaks my heart,’ said Zozan Özgökçe of the Van Women’s Association, which worked to prevent violence against women and girls until it was shut down in November 2016.

Meanwhile, LGBTI+ organisations are being pushed underground, with a sharp increase in intimidation and harassment. Istanbul’s Pride parade was once a prominent display of confidence and diversity, but has been banned for the last three years. In Ankara, all LGBTI events have been prohibited since November 2017. ‘LGBTI+ people feel that the spaces for them to be themselves are drastically shrinking,’ one activist told Amnesty.

Hundreds of people who expressed their opposition to Turkey’s military offensive in Afrin, northern Syria, launched on 20 January, have also been targeted. Among them is human rights activist Ali Erol, who was held in police custody for five days after tweeting an image of an olive tree alongside anti-war hashtags. He now faces a criminal investigation for ‘propaganda for a terrorist organisation’ and ‘inciting the people to hatred and enmity’

This crackdown has had a chilling effect. As lawyer and human rights defender Eren Keskin, who faces 140 separate prosecutions, a travel ban and a potential prison sentence, said: ‘I try to express my views freely but I am also acutely aware of thinking twice before speaking or writing’.