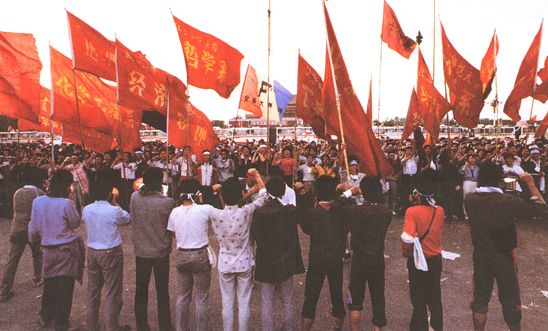 This week marks the 30th anniversary of the massacre of hundreds if not thousands of unarmed peaceful pro-democracy protesters in Beijing and the arrest of tens of thousands of demonstrators in cities across China.

The protesters, based in Tiananmen Square in central Beijing, were peacefully calling for political and economic reform. In response, the Chinese authorities responded with overwhelming force to repress the demonstrations.

Military units were brought in and unarmed protesters and onlookers were killed en masse. The Chinese government has never acknowledged the true events surrounding the Tiananmen massacre. It remains a contentious topic in China, with authorities banning all mention of the protest even today.

Events leading up to the Tiananmen protests

From April 1989 people from across China gathered in Beijing’s Tiananmen Square to mourn the death of the liberal Communist Party leader Hu Yaobang and share their frustrations about the slow pace of promised reform.

The gathering turned into peaceful protests which spread across the provinces of China as demonstrators, mainly students, began to call for an end to official corruption and for political and economic reform.

A million demonstrators on the streets

On 13 May, hundreds of student protesters in Tiananmen Square went on hunger strike in order to speak push for talks with Communist Party leaders. It is estimated that one million people joined the protests in Beijing to express their support for the students on hunger strike and to demand reform.

Party leaders visited the student protests on 19 May. The protesters ended their hunger strike that evening. However, the next day martial law was declared in Beijing to ‘firmly stop the unrest’.

In the weeks that followed the declaration of martial law, hundreds of thousands of people once again protested on the streets of Beijing, with similar demonstrations taking place in cities across China. 'The troops are by no means targeted at the students. Under no circumstances will [the troops] harm innocent people, let alone young students.'
Official New China News Agency, 1 May 1989

Overnight on 3 to 4 June, the government sent tens of thousands of armed troops and hundreds of armoured military vehicles into the city centre to enforce martial law and forcibly clear the streets of demonstrators. The government wanted to 'restore order' in the capital.

As they approached the demonstrations, troops opened fire on crowds of protesters and onlookers. They gave no warning before they started shooting.

'The first casualty in the square was rushed away - a girl with her face smashed and bloody, carried spread-eagled towards the trees. Another followed - a youth with a bloody mess around his chest.'
John Gittings, The Guardian

As the troops kept firing into the crowds, some of those running away were shot in the back. Others were crushed to death by military vehicles. No one knows the death toll from Tiananmen that night.

'We took the wounded on stretchers and went down [Tiananmen] Square. As we went down the side of the Square, we saw soldiers with large plastic bags. They were putting people in the bags. I could not tell how many people...
'There were also people surrounded by soldiers, being kicked by them. I could hear shouts and the odd gunshot. I thought there were around 200 young people. In early July, I heard from Public Security [police] sources that they had all been executed on 9 June in a rural district near Beijing. They included students and residents of Beijing.'
Eyewitness account from a protester The Tiananmen protests were immortalised in Western media on 5 June through the image of a lone man in a white shirt carrying shopping bags, facing an imposing column of military tanks sent by the government to disperse protesters. The man is known simply as Tank Man: his identity has never been confirmed.

Tank Man would not let the military vehicles pass. He succeeded. Eventually, he was pulled out of the way of danger by onlookers. But the image of unarmed man versus tank quickly came to symbolise the struggle of the Tiananmen protesters - peaceful protest met with military might.

'It demonstrates one man's extraordinary courage, standing up in front of a row of tanks, being prepared to sacrifice his own life for the sake of social justice'
Stuart Franklin, Tank Man photographer

Stuart Franklin took the Tank Man photograph. In the short film below he talks about how he came to capture what would become one of the most iconic images of the twentieth century.

Immediately after the military crackdown, the Chinese authorities began to hunt down those involved in the demonstrations. Thousands of people were detained, tortured, imprisoned or executed after unfair trials charged with ‘counter-revolutionary’ crimes.

The Chinese authorities have never disclosed the total number of people detained, tried or executed throughout China since the June 1989 crackdown.

In the climate of terror which followed the massacre, the relatives of those killed were not only unable to seek justice for their loss; they were even unable to mourn openly the dead, who were officially described as ‘rioters’.

Tiananmen and the 1989 crackdown remains an official taboo topic in China. There is no official death toll. Attempts to discuss, commemorate and demand justice for what happened have been forcefully curbed, with no public discussion allowed. Since 1989 many people have been imprisoned for commemorating events or questioning the official line.

Only recently a court in Changshu in eastern China found Gu Yimin guilty of inciting state subversion after he tried to post images of the post-Tiananmen crackdown online and applied to stage a protest on the 24th anniversary.