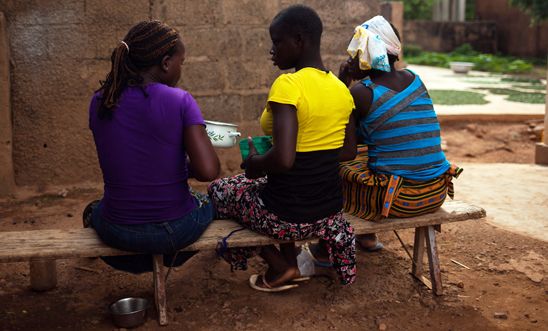 'I never got to finish attending even the first year of primary school, I don’t know why my parents took me out of school... My dad married me to a 70-year-old man who already has five wives. My dad threatened me saying, "If you don’t go to join your husband I will kill you."'
13-year-old 'Maria' spoke to us at the women's shelter pictured above in May 2015

In some parts of Burkina Faso, more than half of all girls are married off before they turn 18. They have no say in the matter. Their lives are planned for them.

Having children is not something they can decide, either. And if they defy instructions to marry or carry and mother a child they have not chosen to have? Chances are they will be threatened or beaten. Our new research reveals the true extent of this.

Read the full report: Coerced and denied: Forced marriages and barriers to contraception in Burkina Faso

Women and girls in Burkina Faso, as in any country in the world, have the right to make their own choices about marriage - who they'll marry, when and how - and having children. Yet this is far from the reality.

Burkina Faso has some of the highest rates of child marriage and forced marriage in the world, despite the fact that forcing someone to marry against their will is a criminal offence in the country.

Earlier this year, the government stated that it plans to raise the legal age of marriage for girls to 18 to help tackle child marriage, announcing a national strategy to reduce child marriage by 20% by 2025. It will also tighten laws around forced marriage in the criminal code.

While these are positive moves, it is a case of 'too little, too late'. Burkina Faso is required under international law to take immediate and sustained action to do away with all child marriage and the many abuses of girls’ human rights surrounding it.

In the meantime, girls and women there continue to be denied childhoods and beaten and abused when they dare to try to reclaim their rights.

Forced marriage is when one or both partners are not able to enter into a marriage freely, because they are being pressured or forced, or threatened with violence. In Burkina Faso, it most frequently affects girls and young women. According to UNICEF, over 52% of all women were married before the age of 18 and 10% before 15.

People consider a forced marriage between social groups or families as a way of consolidating relationships. In some cases, the promise of marriage is acquired at birth or during a girl’s childhood. Often, a girl’s parents receive a dowry from the husband or the other family. Payment varies from region to region and depends on income, but could be paid in money, use of agricultural land or livestock.

'My father wanted me to marry the herder who kept my father’s cows. He wanted to reward him for his services.'
'Céline', aged 15

Expected to mother when they're still a child

Nearly one in three women and girls aged between 15 and 19 in rural areas are pregnant or have a child. The average woman in Burkina Faso will have six children.

Girls and women are generally expected to have as many children as their husbands want, regardless of their own wishes or the threat that early pregnancy poses to their health and life. They raise children when many of them are still children themselves.

Once married, the girls are expected to do the large majority of household chores such as cleaning, cooking as well as working on the farm. Very few have the chance to go to school or work outside. Many will be forced into marriages where the man has more than one wife, and maybe the second or third wife.

'I asked my husband for money [for contraception]. He got angry. He would systematically say no, and in our culture, when the husband says something, women have to obey. Asking for money when it’s for groceries already leads to beatings. You can imagine when you want cash for contraception.'
25-year-old Bintou

17% of women in Burkina Faso use contraceptives – one of the lowest rates in the world.

Nearly all the women and girls we've spoken to said they suffer verbal abuse or physical violence when they raise the issue of birth control with their partners. They also said that their lack of control over financial resources mean that they had to ask for money from their partners to buy contraception.