The UK Home Office – Where Art Goes to Die 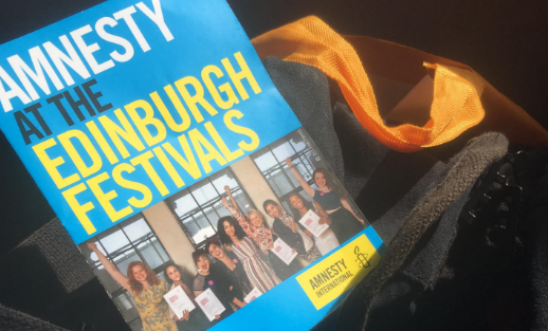 The Edinburgh Festival Fringe is the world’s largest arts festival, taking place annually during the month of August. It runs parallel to two other large arts festivals: the Edinburgh International Festival and the Edinburgh International Book Festival. Every year, festival events take over the city for a month: every unused space is transformed into a venue, and the city temporarily doubles its population. Artists perform preview shows on the streets in an effort to tempt potential viewers, and one cannot walk down the Royal Mile without being handed dozens of flyers for theatre, comedy and music performances.

The Edinburgh Festivals are attended by performers from all over the world, who see it as an opportunity to showcase their theatre, comedy and music. But incidences of performers being denied visas seem to have been at an all-time high at this year’s festival, and in particular many performers from majority Muslim countries have faced such difficulties. The Edinburgh Festival Fringe and International Festival are defined as “Permit Free” Festivals, meaning that performers and their “legitimate entourages” (members of the production crews) do not need to obtain work visas in order to perform. They enter the UK as “Entertainer Visitors”, and if their nationality incurs a visa requirement for the UK they must undergo an application process identical to that of a standard visitor’s visas. The requirements faced by visa applicants, such as proof of ability to support themselves during their visit, leave much room for interpretation on the part of the Home Office.

The 2017 festivals saw a handful of high-profile cases of visa rejections gain public and media attention. Iranian children’s author Ehsan Abdollahi initially had his visa application denied (a decision that was later overturned following media and political pressure) and Austrian singer Conchita Wurst was forced to cancel her performance after her band members were denied visas to the UK. Conchita Wurst performs with a band by the name of Basalt, a trio of Syrian refugees who fled to Austria following the outbreak of hostilities in their home country. Wurst and her band released a video after cancelling their show in which they stated: “we sadly had to stay in Vienna because of an unsuccessful visa application, but we are with you in our hearts.” Regrettably, this was not the only performance at the 2017 Edinburgh Festival that was cancelled due to the denial of visas to Syrian refugees.

These cases point to a number of potentially worrying trends: are those denied visas to the festival disproportionately Muslim? Could these events represent a deliberate policy on the part of the UK Home Office regarding Muslim visitors to the country?

We sent out a survey to festival organisers and venues. Respondents included the Edinburgh International Book Festival, the Arab Arts Focus and the festival’s main venues. The overall picture is grim: visa issues posed a serious challenge for those involved in organizing the 2017 Edinburgh Festivals. Two thirds of respondents said that performers they were working with had experienced visa refusals this year. Reasons given by the Home Office for visa refusals included lack of money in the performers’ bank accounts; lack of family ties in applicants’ home countries; and that the Home Office was not convinced applicants wouldn’t stay in the UK. The Home Office does not specify a requisite sum of money that applicants must have in their accounts in order to be granted a visitor’s visa, resulting in a somewhat arbitrary visa application process

According to survey responses, holders of the following nationalities had their applications refused: Iran, Egypt, Syria, Palestine, Sudan and Lebanon - all of which are countries with majority Muslim populations. Of particular note were the visa refusals faced by Syrian refugees residing in third countries, some of whom had valid asylum status in other EU countries such as France and Austria (Conchita Wurst’s band fall into this category). A shocking survey response by the Arab Arts Focus noted that almost half of their performers had their visa applications declined. With performers from the entire world applying for visas to attend the Edinburgh Festivals, it is very worrying that, according to our survey, the only applicants who had their visas declined were from majority Muslim/Arab countries.

These refusals had grave implications for some venues and production companies. 57% of respondents who had experienced visa refusals were forced to cancel shows, and 85% said they were forced to perform shows with limited casts and production crews. Festival organizers also struggled to book accommodation for performs due to delayed approvals of visas, incurring higher costs for the companies. The Arab Arts Focus spent almost £6000 in dealing with visa issues, and noted a very stressed and tense environment within the organisation throughout the Festival.

Some were concerned these issues would compromise festival programmes in future. One venue said it hoped to continue working with “visa sensitive countries”, but was concerned at the high costs visa applications incurred, making the venue more cautious in booking such shows in future. Two venues stated that they have been forced to reconsider the feasibility of projects involving performers from certain countries, one noting that “it has forced us to re-think bringing Arab artists to the UK due to the difficulties and extra expenses.”

Whether this trend is deliberate or not, the Home Office’s approach to applicants from Arab/majority Muslim countries is extremely concerning. The impact on the Edinburgh Festivals is clear: should the trend continue, future festival’s programmes will have a distinct absence of Arab and Muslim artists, potentially morphing into events that only reflect the art that some of the world has to offer. This trend also raises some broader questions. Is the Home Office attempting to deny certain cultures and ethnicities access to the UK altogether, as tourists, performers or otherwise? Are some people being denied access to the UK simply because they are Muslim?