Suffragette Spirit artwork to be unveiled in Aberdeen 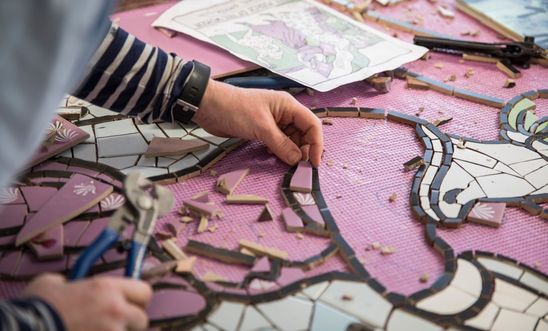 The ceramic mural entitled ‘Suffragette Spirit’ – which will be accompanied by two other works by Carrie Reichardt – will celebrate Scotland's woman human rights defenders, using classic revolutionary imagery and created using the suffragette colours of purple, green and white. This highly detailed work will include women nominated for Amnesty International’s Suffragette Spirit project, a part of its global BRAVE campaign, pictures and facts about the suffragettes, and images of human rights protesters.

“To celebrate 100 years of women getting the vote, I thought it would be great to make this piece to celebrate the "Suffragette Spirit" that still lives on in Aberdeen. I hope it will be a fitting honour to all those ordinary women who have done extraordinary things to advance human rights for all.  When

you look around most UK city centres, there is very little historical public art that celebrates the life and deeds of women. It is fantastic that Aberdeen will have three works focused both on the history of women’s struggle for equality and highlighting contemporary women that continue in the struggle for equal rights.”

“We are delighted that such an acclaimed and talented artist as Carrie Reichardt will honour the Scottish Suffragette Spirit nominees in her artwork. We value the unique power of art to unite people, inspire activism and promote human rights change. We are thrilled to be participating in Nuart Aberdeen and look forward to sharing Carrie's work with our global movement of human rights defenders.”

Amal Azzudin, one of the human rights defenders who has inspired Carrie and is included within the artwork adds:

“I am truly honoured and grateful to be chosen as a woman who embodies the Suffragette Spirit. I am a huge supporter of Amnesty International's work so this means a lot to me. I stand in solidarity with all the women in the world fighting for a better world and the 100 women on hunger strike who are currently in detention in Yarl's Wood Immigration Removal Centre.”

“We’re proud to have developed a long working relationship with Amnesty over the years, collaborating on regional, national and more recently international projects. They’re an organisation close to our hearts with a shared ideology and we’re absolutely honoured to be able to offer grass root platforms for these vital and important campaigns. Carrie Reichardt is an important artist tackling issues and subjects that desperately need our attention, to be able to bring Carrie and Amnesty together under a Nuart platform to shine a light on female suffrage is a powerful thing”

“Aberdeen Inspired is delighted to lead Nuart Aberdeen 2018 and we are honoured to be hosting an Amnesty International panel debate as part of the extensive programme on offer over the festival weekend. We look forward to welcoming human rights defender Amal Azzudin to Aberdeen as well as talented artist Carrie Reichardt who forms part of our fantastic artist line-up. We are excited to see what Carrie will create in such a significant year for women’s rights.”

The ‘Suffragette Spirit’ ceramic mural will be unveiled as part of Nuart Aberdeen, which runs between Thursday, April 12 and Sunday April 15 at various locations throughout the city.