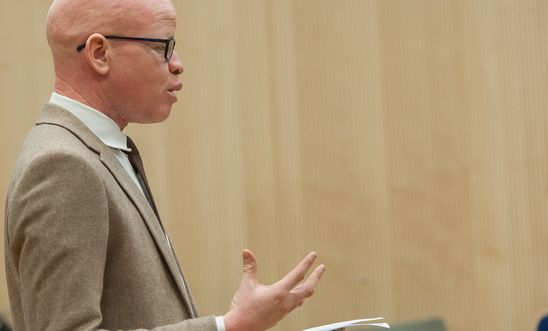 Bonface Massah, Director of the Association of Persons with Albinism (APAM) visited the UK in November 2017. He was originally scheduled to visit in 2016 to coincide with Annie Alfred, a young person with albinism in Malawi, featuring in the global Write for Rights campaign, but his visa was denied. We were delighted that this year his visa was approved and he was able to join the team in Scotland for a whirlwind visit, but a productive one. Here is his report:

The trip was organized from the 14-24 of November 2017 with the aim of meeting Amnesty teams in the UK to improve their understanding of the human rights campaign against persons with albinism in Malawi . Specifically the trip focused on the Write For Rights campaign in which the case of Annie Alfred was featured in 2016 and also on the BRAVE campaign targeting various human rights defenders across the world to strengthen their recognition and protection in response to increasing cases of attacks on human rights defenders and civil society organization. The trip also aimed to facilitate strong links with Amnesty members and allow them to interact with human rights defenders. This did not only provide a platform for networking but building a relationship between the members and APAM. The meetings allowed me to provide feedback on how the campaign has contributed and influenced changes in policy and government commitment in protection and promotion of human rights for persons with albinism, but also to share real life changes in the lives of persons with albinism in Malawi.

The visit was very productive and strategic to APAM as it also focused on established links for supporting APAM programs and empowerment of persons with albinism in Malawi and Africa.

Whilst he was in Scotland Bonface undertook a number of meetings and activities, here are his thoughts on some of them:

Day of the Imprisoned Writer event at the Scottish Parliament

It was powerful to hear real life experience and meeting the people who are in hiding or being threatened, risking their lives and their families, just because they were reporting on human rights issues.

It provided me with a platform to realize that we need to stand in solidarity as the world is facing a lot of human rights violation that are never reported, or if reported the reporters are killed or jailed.

I attended the First Minister’s Questions at the Parliament to learn how Members of the Scottish Parliament conduct their business and how they are held accountable on human rights issues. This also allowed me to appreciate the participatory approach and openness of Members of the Scottish Parliament in questioning critical issues of national interest. In my opinion, the Parliament also presents a good model for equal representation of diversity among people with a good number of powerful women members of Parliament.

I visited Hutchesons Grammar School in Glasgow who supported APAM with letters for Annie Alfred. The students stood in solidarity to give moral support to Annie and assurance that she is loved and accepted by everyone. I also provided feedback on how the campaign has changed Annie's life and how important it was to her.

You can read how inspired our activists were by Bonface in our reports from conference on the blog.

It was a genuine joy and privilege to host Bonface’s visit. The whole Scotland team are in awe of his character, tenacity and bravery.

You can keep up with APAM via their facebook page