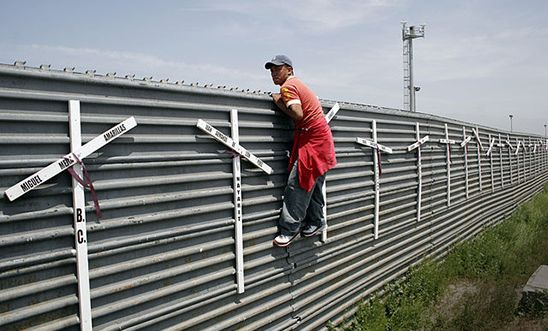 Migrant from Mexico into the US at the Tijuana-San Diego border. The crosses represent the deaths of failed attempts. © Photographer Tomas Castelazo

It angers us to hear how they separate children from their parents, how they allow migrants to die in the desert, and how they detain people - sometimes for years - who are just seeking protection. These are the actions of a government using inhumane policies to deter people from seeking refuge in its country, despite the fact that there are thousands of people who need to escape widespread violence in countries such as Honduras and El Salvador.

Currently, some of these people have the opportunity to get to the US-Mexico border and formally request asylum before immigration authorities - although, from there, the asylum process is long. This option means that they don't have to cross the border irregularly or put their lives at risk. However, the US government now intends to close its doors definitively, and it would appear that it wants to involve Mexico in this dirty business.

In recent weeks, Mexican diplomats have met with officials from the US Department of Homeland Security and one discussion item has been a possible bilateral agreement on refugees. Under this agreement, the United States could turn away people seeking refuge if they get to the United States by going through Mexico. Mexico would be declared a "safe third country" where people seeking asylum would have to go for protection, as a requirement. An agreement of this sort would violate international law and would result in millions of people suffering.

This is not the first time that the Trump administration has sought to transfer its international responsibility to Mexico. When he first came into office, Trump proposed a measure whereby every person requesting asylum in the United States would have to wait for their application results in Mexico. At that time, chancellor Luis Videgaray completely rejected the idea of Mexico becoming a "waiting room" for the United States.

However, this time around, discussions could have a different tone. The US government would reportedly even be willing to compensate Mexico with significant amounts of money.

Mexico certainly has an international obligation to protect those who request asylum in its country, and it is important that this country plays its part. However, this does not mean that Mexico has set a good example when it comes to protecting the rights of migrants.

Here are six reasons why declaring Mexico a safe third country would put the safety of thousands of people at risk:

1. The global system for protecting refugees has, for many years now, been based on the notion of shared responsibility among countries. It would be very dangerous for one of the most powerful countries in the world to set the example of ignoring its responsibility. Both the United States and Mexico must do their part.

2. Mexico violates international law on refugees. According to a report from Amnesty International, migrants report that Mexican immigration authorities systematically breach international and Mexican laws that prohibit sending people back to situations where there is a real risk of persecution or other serious rights violations. If it becomes a "safe third country," thousands of people who are currently seeking refuge in the United States will run the risk of being sent back to their countries by staying in Mexico.

3. Mexico is a life-threatening place for migrants with no papers. Human trafficking, recruitment for organised crime, abduction, extortion, sexual violence and disappearances are some of the issues facing migrants in Mexico. This does not mean that refugees cannot live in Mexico; however, it does mean that the United States sending asylum seekers back to border areas in northern Mexico would be disastrous as it is one of the most violent regions of the country.

4. People don't stop leaving their countries; they are just forced to take journeys that are more dangerous and precarious. Without a formal channel for requesting asylum in the United States, many people will see no other option than to pay "coyotes" or members of criminal networks to help them cross the border. Their lives will be at greater risk and those who will benefit most are criminal gangs and human trafficking networks.

5. There are people who cannot stay in Mexico and need the protection of the United States. For example, transgender people are often at great risk in Mexico, one of the most dangerous countries for this community in Latin America.

The outgoing Peña Nieto administration must oppose any agreement of this kind if it does not want to leave an even more pitiful legacy. It would be shameful for Mexico to negotiate with the United States as there are human lives at stake.