Life in Gaza: terror at night and massacres in the day 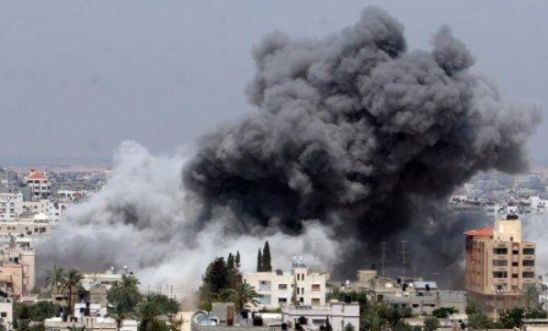 Last Monday and Tuesday were the scariest days and nights since the current conflict began. The violence finally reached the area where I live.  The area where I, my children and neighbours, had thought it was safe.

After I finished my day’s work - gathering information on the killing of the young boys in the Shati Refugee camp on the first day of Eid and the killing of the first Palestinian Christian in this war (both close to where I live) - I lay on the couch and started watching the TV. There was a blackout, but I had switched on the generator.

The news helps me capture the bigger picture, as during the day I focus so much on specific cases and details. Soon after I lay down at around 10:30pm, I fell into a deep sleep and the television remote control fell from my hand. I was woken by the sound of a very loud explosion which was followed by many others in quick succession. We are used to the sounds of explosions from Israeli bombings, but these were extremely loud so we knew that it was very close.

The kids and my other relatives who were displaced and are now staying with me came running to me. I was still stretched on the couch, exhausted. When bombs get close, or when my family is scared, they always come to me. They think I can protect them, or that I am some sort of saviour. Of course in reality, there is nothing that I can do.

Bombs lighting up the sky

I got up and found the sky was lit by loud explosions nearby, in Al-Abbas, Ansar, the Shifa hospital area, and Gaza port. Soon afterwards, intense shelling from the Israeli ships and aerial bombings started. The sounds of explosions, glass breaking, and walls falling down were overwhelming. I told the kids and family to run downstairs and hide in the stairwell and try to keep to the eastern side because the naval shelling was coming from the sea in the west. The windows of my house did not break because I had put duct tape in the shape of a cross all over them to reinforce the glass.

It was terrifying, absolutely terrifying. The bombing went on until six in the morning. It only stopped when the sun came out.

At around 3am the building to the west of my house and the building in front of it were hit with missiles fired by planes.

The explosions were a mix of naval shelling and aerial bombings

My family and the neighbours panicked and people started leaving their houses, not knowing where to go. My family was asking me whether we should leave the building and the neighbours were also shouting at us to leave, but where could we go? I told everyone that we should stay put. Imagine if we left, towards Shifa hospital, which was bombed yesterday but is still considered the safest place in the Gaza Strip. To get there we would need to walk in a big group with children and keep close to walls. The drones may not see we are a fleeing family, and we could easily be bombed. I made it clear to everyone that we have nowhere to go and that we should remain under the stairs at the bottom of the building.

Some neighbours made it to Shifa hospital and they told us the next day just how crowded it was. I thought of the people who were forced to leave their homes in Shuja’iya and other neighbourhoods – they are now living without shelter or any support. I thought that soon I may be like them. But I did not share that with my family.

We spent eight hours hiding in the same place. Every once in a while one of us would go to make tea or coffee to pass the time. But the atmosphere was frenetic; my children would be laughing like crazy at one point and then break down crying a moment later. At one point my young daughter Huda started shivering and her body was as cold as ice; it was as if someone threw her into ice-cold water. Other kids started crying too.

The radio stations went off the air, one after another

The scariest part was when they bombed the media building. During bombing raids, we rely on the radio news, which we listen to on our cell phones, providing a life-line to the outside world. Without it, there is only the sound of the bombs. We were listening to Al-Aqsa radio, but then it stopped after it was hit. We switched to other stations but they all went off the air, one after the other. That was the most worrying thing for me because it made me feel that I lost what little control I had over the situation.

We remained in silence except for the sound of bombing, which after a couple of hours becomes a background noise you get used to, like that of the generator or the fridge.

False news began to circulate, creating panic and confusion. Now, with the electricity also completely out, we were in complete darkness. I could have turned on the generator but I needed to hear the war planes and the drones to know how close they were.

At 6am when the bombing stopped I went downstairs to check on my car and the surrounding area. I was worried that my car was damaged because, believe it or not, the insurance in Gaza does not cover damage from the war. This is crazy; we have war all the time.

I found a large crater in the middle of the street caused by what seemed like shelling from the sea. It was scarily close to our house. I then went on to check on my neighbour’s home and found the roof had been penetrated by a missile. It was the same for another two neighbours’ homes.

By bombing our neighbourhood they are sending a message that there really is nowhere safe in Gaza. I realised that, at any moment, my neighbourhood could turn into Shuja’iya – reduced to rubble by the bombs.

A sense of purpose amid the rubble

After doing a quick check of the neighbourhood I went home and slept for a couple of hours. Then I got up, took a cold shower, and set off to work again as if nothing had happened. This is life in Gaza, terror at night and massacres in the day. You get used to this; you have no choice.

I do my work during the day and do not think about the night until it comes, otherwise I will remain worried. What is important is that my family and I all wake up safe. In any case, we have nowhere to go; we can only remain in my home.

At least I feel like I have a purpose during the hardship, and this is what keeps me going.

I need to keep focused on documenting human rights violations and reporting on them – to get the truth about what’s happening in Gaza out to the world. I feel like I have a duty to serve, not only Gaza but the whole of humanity.

A human rights fieldworker in Gaza gave this account to our researchers. Read his previous blog: 'Nowhere in Gaza is safe'
Take action and call on the UK to halt the supply of arms to Israel

Hamas Turned the entire population of Gaza in to Human shields.

And yet the anonymous 'human rights fieldworker in Gaza' does not deem in necessary to mention Hamas at all.