Donald Trump is alienating his most valuable allies 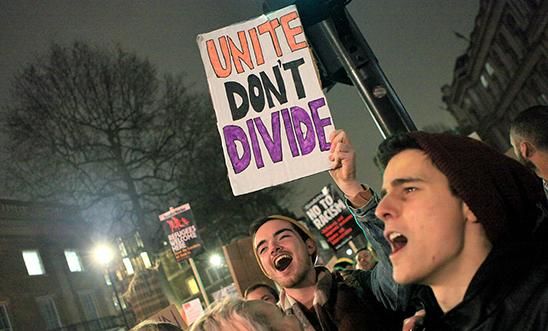 Written by Salil Shetty, Secretary-General at Amnesty International. This piece was originally published in TIME.

Even at a time when human rights are under relentless attack across the globe, the stories and images of human suffering that have emerged this week have been harrowing. Desperate mothers in Yemen cradle their starving children, knowing that there is nothing left to give them. The ever-present threat of attacks by militant groups and air raids compounds their suffering. In Syria, accounts of brutal torture and mass hangings in prisons have reminded us once again why there is such an urgent need for people to flee the country.

The world has long been failing the people of Yemen and Syria, but Trump’s Executive Order plumbs new depths. Last night, a U.S. federal appeals court denied the government's request to put a stay on a Temporary Restraining Order, which had blocked President Trump’s travel ban, meaning it is still suspended — for now. Trump immediately vowed a legal challenge to the decision, and refugees who had been on the route to resettlement are still facing terrifying uncertainty.

The prospect of being banned from the U.S. is still looming over people from Iran, Iraq, Libya, Somalia, Sudan, Syria and Yemen, with the case likely to reach the Supreme Court. We must not forget for a second that the judicial battle has a real-life impact, tearing apart families, leaving people in limbo, separating traumatized children from their parents.

It is hard to overstate the chaos and misery that a reinstatement of the travel ban would cause. We are currently facing the biggest refugee crisis in decades. Ten countries, accounting for just 2.5% of the global economy, are currently hosting 56% of the world’s refugees. Bold leadership from wealthy countries could help to manage this crisis, but it has been sorely lacking.

Yesterday’s ruling, while welcome, did not affect the part of Trump’s Executive Order that more than halved the number of refugees to be admitted to the U.S. in the 2017 fiscal year, placing a cap at 50,000. Many refugees who have managed to leave war zones find themselves in poor countries, where they live on the margins of society in dire conditions which they hope will be temporary. Without work, separated from their families and struggling to see a future, thousands of vulnerable refugees have seen their hopes of resettlement to the U.S., which has a long history of offering shelter to people fleeing conflict, dashed.

In the short time that he has been President, Donald Trump has already trampled all over that history. The consequences will extend far beyond U.S. borders. What will be the effect on the policies of refugee hosting countries like Lebanon and Pakistan if one of the wealthiest and most influential countries in the world curtails its resettlement program so sharply?

It is possible that they will balk at the prospect of hosting their large refugee populations and send them back to their countries of origin — places like Syria, Iraq and Afghanistan, where armed conflict and deep insecurity continue to be the reality.

Earlier this week, Trump took to Twitter to say that “The threat from radical Islamic terrorism is very real, just look at what is happening in Europe and the Middle-East.”

Clearly, the President himself understands that people in some of the seven listed countries are themselves at grave risk from acts of terrorism. His attempt to slam the door on them can therefore only be interpreted as an act of the utmost callousness and cruelty.

Even if we leave aside for a second the gross human rights violations that would spiral from suspending the refugee resettlement program, it’s clear that excluding people fleeing war on the grounds of protecting the U.S. from terrorism is a pitiful failure of logic. Refugees are often the victims of acts of terror; they are not the perpetrators. That one of the most powerful men in the world cannot grasp this distinction is alarming indeed.

In pushing this travel ban, Trump is alienating some of his most important allies in the fight against terror — the other people who have suffered at the hands of armed groups like the one calling itself Islamic State. The real threat to American security will come from sabotaging these allegiances and turning more and more people hostile to the U.S. But Trump chooses to not see the things we have in common with refugees or to listen to their stories. He sees only differences and borders, and it is now our common duty to stop this way of seeing from spreading.

The bar on Syrian refugees and resettlement deliberately inflict suffering on some of the most vulnerable people in the world, all under the grotesque pretense of protecting U.S. citizens. But increasingly, Americans are sending the message that this ban does not represent them, that it is antithetical to everything their country claims to stand for. Huge numbers of people have taken to the streets in protest and their brave activism should inspire us all.

Our response to xenophobia and racism must be solidarity and strength. History does not look kindly on those who turn their backs on the vulnerable, and we must accept our shared responsibility to stand up for our principles in this dangerous time.

Dark days lie ahead for everybody who cares about human rights, and especially for refugees, but the huge civic opposition and legal challenges we are already seeing show that there is light still. Where Donald Trump tears families apart, we must seek to unite. Where he attacks, we must welcome. Where he tries to close doors, we must fight to keep them open.