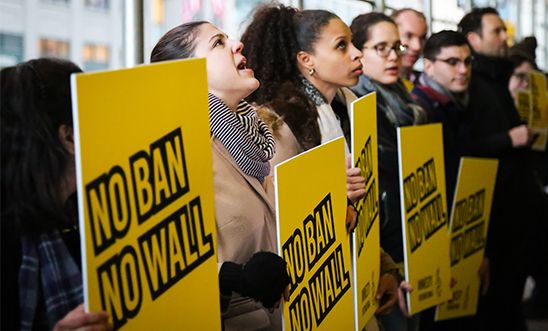 And so the catastrophe continues: Donald Trump’s senseless travel ban has been extended to include restrictions on travellers from Chad, Iran, Libya, North Korea, Somalia, Syria, Venezuela and Yemen.

Yet the US administration resumes their policy of going against the basic values of decency and dignity when it comes to helping oppressed people – the very people they have had a major hand in oppressing.

They claim this is all in the interest of national safety. But Trump’s campaign of tearing families apart and demonising whole nations for the crimes of a few cannot be normalised and it cannot go on.

Many are fleeing the very violence the US government also wants to keep out, yet they are being held hostage to dangerous situations simply because of their nationalities.

The suffering goes on

No one is safer because of this new development. By slamming the door on desperate people who are simply looking for protection, the risk of suffering by many parties goes. What’s more, these actions could encourage other countries to enforce similarly or even more sweeping bans.

We must not stand for this state-sanctioned discrimination. It is causing devastation not just for those seeking safety but for those who simply want to travel, work, or study in the United States.

To us it couldn’t be clearer: this outrageous ban must not stand in any form.