LGBTI rights are a work in progress 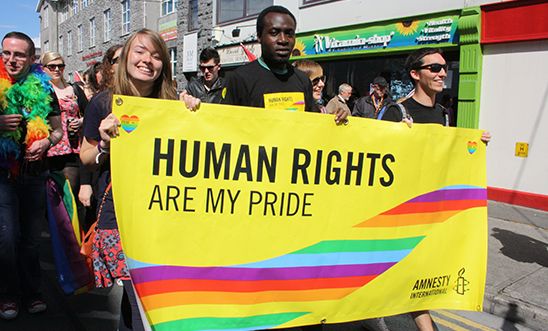 It's fifty years since the UK legislated for a partial decriminalisation of homosexuality. We’ve come a long way since yet we are still a long way off a truly equal society for LGBTI+ people both here in the UK and globally.

Today across the world people are suffering horrific abuse and torture simply because of their sexuality. Consensual same sex relations are still illegal in 78 countries, and punishable by death in eight, including Iran, Mauritania, Saudi Arabia, Sudan and Yemen as well as in some regional states in Nigeria and Somalia.

In the southern Russian republic of Chechnya more than 100 men suspected of being gay have been abducted, tortured and some even killed.  The Chechen government won’t admit that gay men even exist in Chechnya. You can take action for gay and bi men in Chechnya here.

Transgender people across the world face harassment abuse, intimidation and murder simply for being trans.  President Donald Trump has banned transgender people from serving in the US military.

They are often forced to undergo gruelling psychiatric assessments or forced to have surgery leading to infertility, to make any change to their legal gender.

For example, we are campaigning now to change Finland’s legislation on legal gender recognition.   We are working with a Finnish medical student on this, Sakris Kupila. Sakris struggled for years trying to live his life in completely the wrong role and was devastated when he found out the law required him to be sterilised to change his gender.

Because of his work advocating for trans people he has faced harassment, intimidation and threats of violent beatings. We are working with Sakris and campaigning for a change to that cruel law in Finland. You can take action for Sakris now.

We are also starting to develop work with Intersex organisations in the UK and abroad to raise awareness of their rights violations. An overview of intersex rights and interviews with intersex voices can be found here.

In the UK same sex marriage is still banned in Northern Ireland and last year sexual orientation hate crimes were the second most recorded type of hate crime in England and Wales. At the same time there is some progress as the government is planning to simplify the gender recognition process for trans people. It is currently running a survey seeking the views of LGBT people living in the UK – so if you are an LGBTI+ person then please do share your views with them.

So yes – we have made progress in the UK, but we must keep fighting for the rights of LGBTI+ people at home and abroad.  If you agree with us please join the Amnesty UK LGBTI Network (for free) to be a part of a global movement of people campaigning for change.