The persecution of the Ahmadiyya community 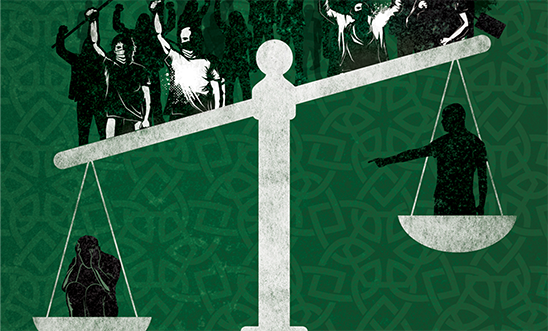 As good as dead: The impact of blasphemy laws in Pakistan © Amnesty International

For the 5 million Ahmadis in the world, religious persecution has been particularly severe and systematic in Pakistan, which is the only state to have officially declared that Ahmadis are non-Muslims. Persecution and hate-related incidents are regularly reported from different parts of the country. Ahmadis have been the target of many violent attacks by various religious groups in Pakistan.

As a long time member of Amnesty International UK and former Pakistan Country Coordinator, I had the pleasure of meeting Mr Abdul Qadeer twenty years ago. Abdul was an Ahmadi and had just been released from prison in Pakistan. He visited the Amnesty group in Coventry, who had campaigned for his release. So, Amnesty has been working for the human rights of Ahmadis for a long time.

Religious minorities must not be outlawed

As I recently returned to the role of Pakistan Country Coordinator, it would be great to re-invigorate the work in raising awareness of the persecuted Ahmadiyya community in Pakistan as well as many other countries around the world, including the UK.

At the Amnesty International UK 2017 Annual General Meeting, there was an overwhelmingly positive response from members that the freedom and dignity of the Ahmadiyya should be preserved in order to manifest their religion in teaching, practise, worship and observance.

While many countries refuse to accept the Ahmadiyya as Muslims, the most extreme examples of this discrimination are the Second Constitutional Amendment (1974) and Ordnance XX (1984). These Pakistani laws made it a crime for Ahmadiyya to describe themselves as Muslims, or to call their places of worship as mosques.

I should point out the anti-blasphemy laws in Pakistan do not apply solely to Ahmadiyyas: Christians and others are also accused, nor is Pakistan the only country where Ahmadiyyas are persecuted – there are anti blasphemy laws in many countries, including Bangladesh, Indonesia and Saudi Arabia

The sentencing to death of three Ahmadis in the Punjab – they have been held since May 2014 when they tore down an anti-Ahmadi poster: a fourth man was killed in police custody shortly after being arrested.

At least 280 Ahmadi men and women have faced investigation or prosecution over the past year in Algeria, since a wave of arrests began after failed attempts to register an Ahmadi association and inaugurate a new mosque in 2016.

Leaflets were distributed across London's universities, mosques and shopping centres, calling for the killing of Ahmadis.

Glasgow Ahmadi shopkeeper, Asad Shah, was stabbed to death by a religiously motivated man who had travelled from Bradford specifically to assassinate Asad Shah. This murder led to a widely supported anti-extremism campaign in Glasgow.

An attack by a mob on Ahmadis in Gujranwala resulted in the death of two girls and their grandmother and left eight people injured, including one child – no action was taken by the authorities to prevent the attack nor to prosecute the attackers: details in the Amnesty report 'As Good as Dead'.

Following attacks on two Ahmadi mosques in Lahore, leaflets were distributed asking readers to kill Ahmadis and two Ahmadi mosques were vandalised. Calls were issued to boycott businesses owned by Ahmadis. Ofcom criticised the UK-based Ummah Channel for broadcasting three interactive television programmes May 2010, in which religious leaders and callers alike said that Ahmadis should be killed.

The discrimination must stop

I urge you to join with me in taking action to protect the right of Ahmadis in the UK and in other countries to practise their faith in peace.

Downloads
The Impact of the Blasphemy Laws in Pakistan