Remembrance and Resistance：The 28th Anniversary of the June Fourth Massacre 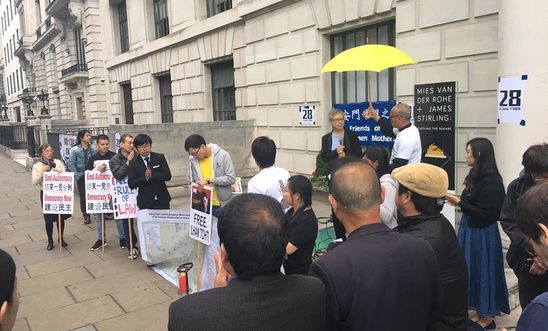 On Sunday the 4th of June, 7pm-10pm, around 70 people gathered in front of the Chinese Embassy in London to commemorate the Prodemocracy Movement in1989. Participators highlighted ten stories of the citizens who were killed in the Massacre by the army of the Chinese Communist Party.

The courage of the tank man has never died. It has manifested itself in the rights defending movements across China, in the struggle for freedom of the Tibetan and Uyghur peoples, in the Umbrella Movement in Hong Kong.

Ten stories of the citizens who were killed in the Massacre by the army of the Chinese Communist Party.

Song Xiaoming (宋曉明), 32 years old, technician at the Ministry of Space, Factory 283. On the night of June 3, 1989, Song was walking southwest on the sidewalk at Wukesong intersection. He was killed by the gunfire from a military vehicle coming from the south that was aiming at the slogan-shouting crowd. Sung was shot in the thigh by a bullet that cut through a major artery. He was sent to No.301 Hospital, but a soldier carrying a gun ordered the doctor not to save Song and not to give him any blood. Ultimately, Song lost too much blood and died in the early morning of June 4.

Xiao Bo (蕭波),  27 years old, lecturer in the Chemistry Department, Beijing University. He was admitted to the Technical Physics Dept. of Beijing University at the age of 16. On the night of June 3, 1989, his birthday, Xiao went to Muxudi with a view to persuading the students to return to school. He was hit in the right side of the chest by a bullet and died at Fuxing Hospital. he had a pair of new-born twins.

Xiao Jie (蕭傑), 19 years old,  Student of the class of 1988, Journalism Department, China People's University. In 1988, he was an organiser of Student Forum in his university. On 18 April 1989, he was one of student representatives who submitted a petition to the National People’s Congress while hundreds of students sit in the east side of the Great Hall. He was an initiator of the preparatory committee for the Students Autonomous Federation at People's University. Xiao Jie, together with my fellow students, marched to Tiananmen Square, and took part in the sit-in and hunger strike. Xiao Jie had a train ticket to Chengdu, Sichuan dated June 5, 1989. At about 2:00 p.m June 5, he was walking on the south side of Nanchizi. When he was crossing the road, Xiao Jie was shot dead by a bullet in the back which came out through the chest.

Wang Weiping(王衛萍), 25 years old, doctor of the Department of Gynecology and Obstetrics, Beijing People's Hospital; graduate of the Beijing Medical University.On the night of June 3, 1989, Wang was shot in the neck while trying to attend to the wounded near Muxudi. She was taken to Beijing University Hospital, but attempts to save her life failed.

Wang Jianping (王建平), 27 year old, truck worker in the southern suburbs at Beijing City Gas Company. On the night of June 3, 1989, Wang was shot in the left side of the chest at Xidan. His lung was badly damaged and he died in the Beijing Emergency Center in the early hours of June 4.

Wang Peiwen (王培文), 21, student in the Youth Work Department of the Chinese Youth Politics College, admitted in 1986. In the early hours of June 4, 1989, near Liubukou, Wang was walking at the head of a group of students withdrawing from Tiananmen Square. He was run over by a tank and his body was crushed.

Wu Guofeng (吳國鋒), 23, Student in class of 1986 in the Industrial Economics Department of China People's University, in 1989 was a member of the preparatory committee for the Students Autonomous Federation in his university. On the night of June 3, 1989, Wu left school on a bicycle carrying a camera. He was hit in the back of the head by a bullet, and also had gunshot wounds in his shoulder, ribs and arm. After he felt flat to the ground, he was stabbed with a bayonet in his belly, as he had a two-inch long knife wound, and there were knife cuts in the palms of his hands. As an old person was taking him to the Posts Hospital, he told this person what university he was at and then died. On the morning of June 4, Professor Jiang Peikun, while searching for the body of his son, discovered Wu's body in the Posts Hospital. Jiang was entrusted by the hospital to bring the name list back to school. After cremation, Wu's ashes were taken back by his parents. Wu participated in the students' hunger strike for five days.

Dai Jinping (戴金平), 27, a graduate student at the Landscape Architecture Department of Beijing Agricultural University. Shot in the chest near Chairman Mao’s Mausoleum in Tiananmen Square on the night of June 3, 1989. He was killed at around 11 p.m. His family members saw his body around June 10 in the morgue of the Friendship Hospital in southwest Beijing.

Li Haocheng (李浩成),  20, a undergraduate in  the  Chinese  Department  of  Tianjin  Normal

University, was shot by two bullets at the southeast corner of Tiananmen Square and died.

Yang Yansheng (楊燕聲), 31,  Employee of Sports News. In the early morning of June 4, 1989, he was hit in the midriff by an exploding bullet on Zhengyi Road while trying to assist those wounded. He was taken to Beijing Hospital, but attempts to save his life failed. He was cremated and his ashes are at Wanan Public Cemetery.

Park Changkui (Piao Changkui, 朴長奎), 47, Korean, musician of the China National Ethnic Song and Dance Ensemble. On the night of June 3, 1989, Piao was shot somewhere between Xidan and Fuxingmen. The bullet entered the back left side of his head from the rear and exited through his neck. He died at the Posts Hospital. His remains are at the Jinshan Cemetery. No tombstone has been erected.