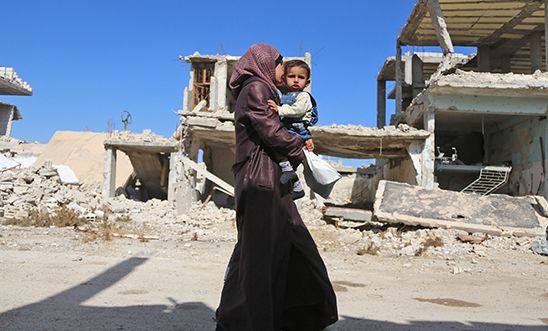 The UK, the USA and France have now followed through on hints and threats and taken military action against the Syrian government, which they hold responsible for the recent suspected chemical weapons attacks in Douma.

It’s important to remember the context here. For the past seven years, the international community’s catastrophic failure to take meaningful action to protect the people of Syria has allowed various parties to this terrible conflict, most notably pro-Assad forces, to commit war crimes and crimes against humanity with complete impunity, often with the assistance of outside powers, particularly Russia.

UN Security Council resolutions have been repeatedly flouted and ignored by both Bashar al-Assad’s government and other belligerents. Widespread frustration with the ineffectiveness and failure of this international body’s inability to protect Syrian civilians is totally understandable.

And it’s the protection of civilians which must be the key priority in any planning and implementation of new military action in Syria. That’s why we continue to call on all parties to fully comply with international humanitarian law. In particular, those concerned absolutely must:

If the US and its allies decide to launch further strikes on Syrian military targets they must ensure that these are strictly proportionate and carefully targeted. The paramount concern at all times must be to avoid or minimise the loss of civilian life.

It’s highly likely that the Assad regime may use civilians as “human shields” - so every effort must be made to avoid killing or injuring civilians being used in this way.

Civilians in Syria have already suffered unimaginably in this utterly brutal conflict, overwhelmingly through Syrian government and Russian air bombardments, but also through US-led airstrikes against armed groups like ISIS.

Syrian civilians mustn’t be made to suffer even more through indiscriminate attacks by the USA, the UK and others.

The rules of war are there for a reason. Ignoring them will only lead to further civilian suffering and that is the last thing Syrians need.

I think its catastrophic how these international powers are again bent on creating another crisis of its sort and then they wont be willing to take the blame for it. UK is brexiting just to keep the immigrants out but willing to create more by attcking syrians. Its a shame. Refugees need help and support and proper policies.