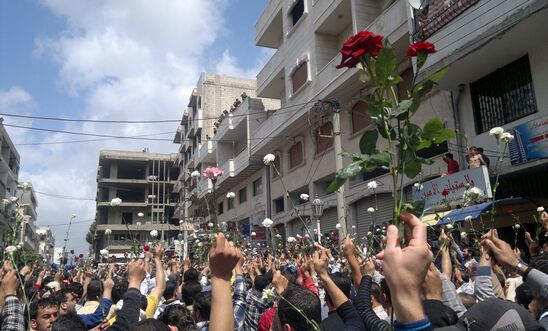 A peaceful pro-reform demonstration in Baniyas, Syria, 6 May 2011. © Syria-Frames-Of-Freedom

The UN Development Program in Syria is working directly with a group many Syrians believe to be complicit in crimes against humanity. This is the same UN office that thanked Russian authorities for supporting Syrians at the very same time when Russia was threatening the lives of four million people in the north of Syria.

A recent post by UNDP Syria highlighting its cooperation with the National Union of Syrian Students (NUSS) is the latest scandal embroiling the UN in Syria. It refers to their work with the NUSS in organizing the Hult Competition. The Hult prize organization is a partner to Hult International Business School, Education First, and the UN Office for Partnership.

The NUSS stands accused by many Syrians of complicity in crimes against humanity against students in Damascus university and other Syrian universities. One of their well-known victims is Ayham Ghazzoul.

Ghazzoul was a masters student studying dentistry when he was detained inside Damascus University. He was tortured and beaten severely with iron rods by NUSS members before they handed him over to Syrian security forces. One of the Union members who attacked Ayham and supervised his arrest and torture was Iyad Talab, who was head of the Damascus University UNSS office at the time. He is currently a member of the Executive Council of the Union.

Mariam Alhallak, Ghazzoul's mother, was shocked to learn that a UN office collaborates with those involved in the murder of her son. She said: "The Syrian Students Union is responsible for the arrest and killing of many Damascus University students. Iyad Talab is the criminal personally responsible for killing my son, Dr Ayham Ghazoul. He hit him on the head with a stick causing him to faint. My son had internal bleeding that took his life. Now Talab is honoured by the United Nations for his actions."

Yaman AlQadri is another victim of the NUSS. Her colleagues called her the flower of the medical faculty. Demonstrations were named after the 18-year-old when she was detained and beaten by members of the NUSS under the supervision of Iyad Talab. "They dragged me into a small security booth. For almost an hour, I was continuously slapped and beaten up. I heard the worst swearing one can imagine. I was threatened with never seeing my family again and being expelled from the university," AlQadri said. Later, she was handed to security forces by the Union, where she endured two weeks of torture, harassment, and threats of rape.

In November 2011, Majid Al Bunni went to Qalamoun University for his lectures, where he was studying international relations. He was shocked by the scenes inside the campus. Students were being beaten and dragged outside to be thrown into vehicles. He knew there were demonstrations but did not expect that some of his university colleagues, members of the Union, were beating their colleagues. He quickly fled. While waiting for a bus, he was approached by a security officer who UNSS members accompanied. The officer initially asked for his ID, but then they started beating Majid. He fell to the ground, and a group of five kept hitting him with sticks. "I lost consciousness after they beat me on my head", Al Bunni said to me. He added, "they were even fiercer than the security forces themselves. I still wonder where did they get all this hatred from". He was taken to security branches along with more than 30 students. Al Bunni was released later, and he fled the country to Germany.

The Students Union has long been known to work with Syrian Intelligence to suppress peaceful activism or attempts by students to express their opinions in demanding reform and human rights. They were particularly vicious against students who condemned the violence of the Syrian government and anyone who took photos or videos of the demonstrations and violence against students. They also infiltrated independent student groups to report them to the intelligence services.

They accompanied Baath Party members and intelligence members inside the universities to beat students, shock them with tasers, drag them out of campuses and hand them to the security forces. The Union even had torture and interrogation rooms inside Damascus University. Multiple ex-students from the University can vouch for this.

In his academic paper: "In the Shadow of the State -The Rise of Kata'ib Al-Baath at Aleppo University after 2011", Ali Jasem, from Utrecht University, describes the NUSS and its affiliation to the regime: "The NUSS falls structurally under the control of one of the Ba'ath Central Command Offices in Damascus and is attached to the Youth Office, of which Ammar Saat - leader of the NUSS between 1995 and 2020 - is the head". Ammar Saati is sanctioned by the US for his roles in the Syrian government. Saati's NUSS not only brutally cracked down on university students but also actively recruited students to fight for pro-Assad militia groups.

Did the UNDP do any due diligence before engaging in this partnership? If so, did they miss these crimes or decide to ignore them? I contacted UNDP Headquarters in New York on 19 July, asking them to comment on this collaboration. They replied the next day, saying they are working on the answers, but as of 27 July, they have still not replied with answers.

The student victims of the NUSS and their families are shocked and devastated by the UNDP. They feel this latest scandal only adds to their suffering and injustices.

This partnership between UNDP and NUSS is not vital for saving lives, nor is it providing urgent humanitarian assistance. This partnership violates its principles and the core values of the Hult Organization to support students for a better future. The National Union of Syrian Students is complicit in crimes against humanity, including torture, murder and enforced disappearance. It continues to operate with complete impunity. The UNDP should immediately end its collaboration with the NUSS.