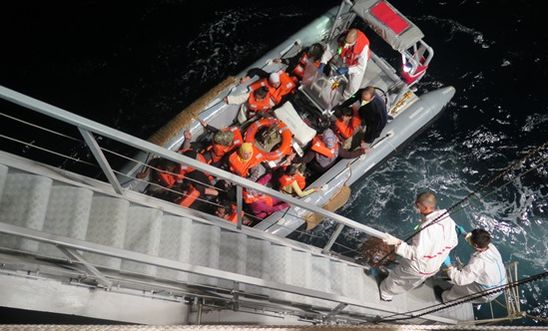 The Mediterranean has been a holiday destination for decades. In recent years, however, it has acquired new fame as the world’s deadliest sea crossing.

So far this year, the death toll has climbed at an even faster rate than over the same period in 2015.

However, following the belated decision by Europe’s leaders in late April to reinstate an effective search and rescue mission, this has for the time being been stemmed.

The men, women and children attempting these perilous journeys in unseaworthy boats come from many countries including Eritrea, Afghanistan, Somalia and Nigeria. But by far the single largest number by nationality is Syrian.

The current conflict in Syria has caused the worst humanitarian crisis this century.

Around 4 million people have fled the country. Although the great majority of these refugees remain in neighbouring countries, many have been forced to seek hope and security for themselves and their children further afield.

We spoke to refugees and migrants in Italy and Malta about the dangers they faced during their journey at sea, including beatings and overcrowding. Some even survived shipwrecks.

‘There was a big crack across the boat and it wasn’t very sturdy. They separated me from my family and slapped me. They didn’t give us any food or water for the journey… I will never forgive myself for putting my family through this.’
Mohamed Janil and his family fled from Syria following the conflict

Syrian doctor Hasan Yousef Wahid is a survivor of the Lampedusa shipwreck in October 2013. After receiving death threats in Libya, and being denied safe access to Egypt, Tunisia and Malta, Hasan felt he had no choice but to take to the sea.

‘We are hanging on to the hope that we will find our children. All we want is to find our daughters, either dead or alive.’
Hasan Yousef Wahid, a survivor of the Lampedusa shipwreck, 11 October 2013

We’re calling for more safe and legal routes to Europe to be provided so that refugees do not feel that they have to resort to taking such dangerous journeys. For example, EU countries should increase the number of resettlement places.

Spurred by the increase in preventable deaths and international pressure, European leaders met at an emergency summit in April 2015 to address the crisis.

Ahead of the meeting, we called for all European Union countries to strengthen search and rescue operations in the Mediterranean and the Aegean seas through a joint effort.

We warned that increased resources alone would be insufficient if the operational area of these resources was limited to what was then the limited area of the EU’s Operation Triton.

Triton is the EU’s border policing mission in the Central Mediterranean. Before the tragedies in April, Triton operated only within 30 nautical miles of the Italian coastline. This was in stark contrast to the Italian Operation Mare Nostrum, withdrawn at the end of 2014.

The vast majority of disasters occur much further out. A boat can go down within minutes – the further away a rescue vessel is, the greater the likelihood people will drown before they can be reached.

Operation Triton is not the only contribution to the search and rescue mission.

The Italian coastguard and navy continue to patrol areas where those at risk on the sea are likely to be found. The UK joined this effort through the deployment of HMS Bulwark in May. It is vital that these combined efforts are continued while the current crisis persists.

With the Syrian conflict raging and violence spreading in the Middle East, the number of people trying to reach safety in Europe is unlikely to go down. We’re urging the EU and its member states to:

Downloads
Read the report – Lives Adrift: Refugees and migrants in peril in the central Mediterranean