On patrol with the Italian Navy, searching for refugees in danger at sea 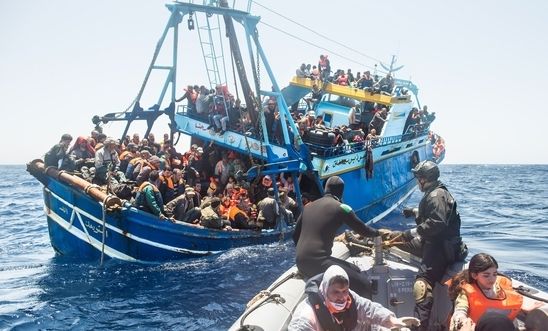 Syrian asylum seekers on board a fishing vessel are rescued by the Italian Navy. © Massimo Sestini/eyevine

Written by Matteo de Bellis, Campaigner at Amnesty, who spent the last week on a search and rescue operation aboard an Italian Navy frigate, the Virginio Fasan. This is the first of two reports from the mission. Read part 2 of Matteo's report.

At the peak of the tourist season, the island of Sicily offers sunny beaches, glorious seafood and pleasantly breezy evenings to many.

But thousands of those heading to Sicily these days aren’t looking for those things. They are fleeing for their lives, leaving behind them conflict, persecution and poverty.

Each trip may be their last: we know that more than 1,000 people have drowned on this journey so far this year. The real number could be much higher.

Starting our journey in the opposite direction, we leave from the port of Augusta on eastern Sicily, on a Sunday evening. I am with officials and crew of the Italian Navy aboard the Virginio Fasan, a brand new frigate. Their mission is clear: to save as many lives as possible.

As a gorgeous sunset fades and an equally fascinating full moon rises, we start navigating under the silent, imperious sight of the volcano, Etna. In Italy, tonight is celebrated as the night of St. Laurence, when people look to the sky for falling stars and make a wish for each one.

Out at sea, our focus is on spotting more tangible things in the dark waters. 'The full moon is a good thing,' an Italian Navy official tells me. 'At night it is much easier to spot people at sea if you can benefit from the moonlight.'

As we leave Italian waters, we know that a boatful of desperate people has probably left Libya already, heading north on a trip mirroring ours.

We also know far too well that they might not make it, if it wasn’t for the effort of the Italian Navy officials running the Mare Nostrum 'Our Sea' operation.

Almost every day, they are rescuing migrants and asylum-seekers at sea and taking them to various ports in southern Italy. They have rescued over 100,000 people since the operation began in October 2013.

The initiative was prompted by public outrage following several shipwrecks near the island of Lampedusa last year, in which more than 500 people – including many children – drowned.

Before embarking on the Virginio Fasan, I spoke to many men, women and children who had just arrived in Sicily by boat from Libya. They told me about the abuses they had suffered on their grim journeys towards and through Libya; about the fear they felt during their difficult and sometimes tragic trip at sea; and about their friends and relatives who didn’t make it.

Endless human rights abuses in their home countries, such as Syria and Eritrea – and also in destinations such as Libya – are forcing thousands of people to head towards Europe.

Despite the great results and personal sacrifices of those implementing the Mare Nostrum operation, people keep dying at sea. In the latest example, two Syrian men we interviewed in Catania, a city in eastern Sicily, spoke of the horror they went through on 2 August, about 18 hours after they sailed from the Libyan city of Zuara.

They told us that over 600 people were on board when the boat capsized. The Italian Navy, which rescued 268 people and retrieved the bodies of a woman and a child some 40-50 miles off the Libyan coast, have lower estimates.

The true dimension of this tragedy, and many similar cases, is still to be clarified. What’s certain is that dozens of families are now waiting for a phone call from their loved ones that will never arrive.

And most European governments are still keeping their eyes well shut. They could reduce the number of people risking the fiercely dangerous journey across the central Mediterranean, by providing visas for people fleeing conflict who wish to seek protection in Europe, and by allowing more refugees to resettle in host countries and reuniting them with their families.

Until this happens, European governments need to start funding more search and rescue operations at sea, and work together to co-ordinate them. Italy can’t do this alone.

Just a matter of time

When I meet them, the crew of the Virginio Fasan have just disembarked around 210 men, women and children they had rescued two days before.

Now they have an evening to relax, and on the main deck, the atmosphere is cheerful. There is music and pizza, a chance to chat without hurry, and then to sleep for more than four or five hours – rarely the case during rescue operations.

All of this much needed to throw the stress overboard and recharge their batteries. But Monday morning quickly arrives.

Our boat approaches the area of the central Mediterranean it is expected to patrol. The sea is calm, but everyone becomes more serious: this is no time for chatting.

We hear that another Navy vessel has just disembarked in Reggio Calabria, in southern Italy, with over 1,700 people rescued at sea.

We know that another call for help will reach us too, sooner or later. It’s just a matter of time.