Rescuing a thousand refugees and migrants in the Mediterranean 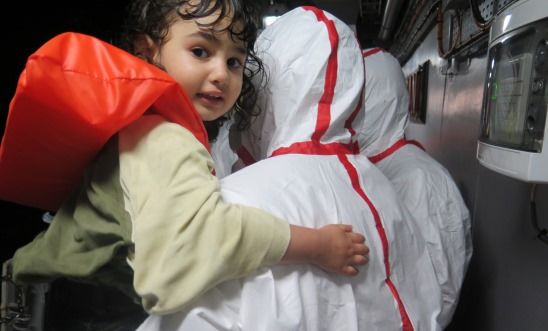 Written by Matteo de Bellis, Campaigner at Amnesty, who spent a week on a search and rescue operation with the Italian Navy. This is the second of two reports from the mission. Read the first report by Matteo.

We are patrolling the central Mediterranean between the Italian island of Lampedusa, Tunisia and Libya. The Virginio Fasan is the biggest vessel in this area and will take on board people rescued by smaller boats and disembark everyone together.

The ship’s helicopter needs routine mechanical tests, so the pilots invite me along to Lampedusa. The island remains an outpost along Europe’s frontier, but has been much quieter since Italy’s Mare Nostrum ('Our Sea') operation began in October 2013. People rescued at sea are now transferred directly either to Sicily or mainland Italy.

Then an urgent message arrives: other boats are rescuing people in distress and the Fasan is heading towards them at full speed. The helicopter must get back on board before it moves too far away.

Back on the ship, the situation is complicated. A Coast Guard ship a few hundred meters away has taken onboard about 500 people.

Two need urgent medical treatment, and medical personnel from the Fasan are immediately dispatched by helicopter. One person has a suspected spinal injury, but he will survive.

Meanwhile, a commercial vessel has rescued 727 people. Just before we go collect them, an SOS is launched from yet another boat, stating its position 25 nautical miles away. We must find it immediately.

We reach the area in an hour, but the boat isn’t there. It’s getting dark, and the moon isn’t up yet. The Fasan keeps patrolling, officials scrutinizing the sea.

I force myself to think positively: maybe its stated position was wrong, maybe it is being rescued by other ships. Maybe.

Barefoot and shaking with cold

Around midnight the Commander decides to return: we still have to take those 727 people onboard.

Using two rubber dinghies, a dozen people at a time are transferred to the Fasan. Families are transferred first. Some arrive barefoot, some children are shaking with cold. People don’t speak much and their faces are tense.

The stern of the boat is transformed into a 'red zone', with access only for authorized crew wearing protective suits and masks. The deck gradually fills with men sitting or lying down next to each other.

Two hangars are set up: one for families, the other a hospital. A few people have injuries, but luckily this time there are no casualties or people needing intensive care. The transfer goes on all night long.

Several crew members ask me the same rhetorical question: what kind of misery are these people escaping from to risk such a perilous journey?

The following morning we also take onboard another 277 people rescued from three different boats. By lunchtime, the deck is filled with 1,004 people from Syria, Somalia, Gambia, Bangladesh and other countries.

Everyone receives water and food, and a synthetic blanket that looks like aluminium foil. People start queuing for the loo. Children play.

When Lampedusa appears on the horizon, a crew member tells me this is exactly the point where 366 people – mostly Eritrean and Somali refugees, including many children – drowned on 3 October 2013.

Many corpses are still trapped in the boat, on the sea bed, including a man and a woman who are still hugging each other.

I talk to some of those rescued. Mohammed, 30, from Damascus, says he left Syria to escape army service.

His boat left from Zuara in Libya: 'At night we were taken with a small boat to a bigger, wooden boat. They told us it contained 300 people, but we were 650. We were without compass, GPS and telephone, just looking for a big ship to save us. Sometimes I was feeling "I will die, I will die". Italy helps to save thousands of people from Syria or other countries. Maybe another country from Europe should help Italy.'

Wassim, 40, from Aleppo, is a civil engineer: 'We are 200 from Syria, about half women and children. In my country you cannot live, there’s no future. We travelled to Algeria and then Libya through the desert. We travelled across the sea for 10 hours. I’d like to go to Sweden or Norway, for my children. I have three boys still in Algeria with my wife.'

A group of Somalian women attract my attention, chatting and laughing, and wearing traditional, colourful dresses. They show me marks from beatings they say they received from the Libyan police.

A young man from Gambia, just 16 years old, tells me he wanted to go home to flee the violence in Libya, but that the road was closed: 'That’s why we come here. When I saw the ship yesterday, I was very happy, it’s like I’ve seen my mother or my father. I want to thank all Italians.'

Many more express their gratitude to the Italian Navy for rescuing people at sea. They know that if Mare Nostrum stops without another European search and rescue operation being launched, far fewer people will arrive in Europe.

Not so much because people won’t risk the journey, but because many more will die at sea.

As evening falls, people ask for more blankets, water, food. The crew tries to accommodate their requests, but managing so many people in such a restricted area is clearly a challenge.

On Friday morning, we see Capri and the Gulf of Naples on the horizon – beautiful landscapes that for centuries have attracted tourists.

Screenings and identification procedures take hours, before buses take people to shelters in the region. Mohammed and Wassim will probably stay just long enough to arrange their onward journey towards northern Europe. Perhaps the Somali women will do the same.

The Gambian children may well stay in Italy, where reception conditions are often bad and the risk of falling in the net of labour exploitation is high.

I disembark too and wave up to two officials on deck. They have a few hours to clean up and recover from two almost sleepless nights. The cooks will make pizza before they head out to sea again, once more looking for people forced to risk their lives to get the protection they are entitled to.

Once more putting a patch on a cut as deep and open as the sea, laying bare Europe’s inability to live up to the humanitarian values it prides itself on.