Tortured Sufi prisoner must be released

Behnam Mahjoubi, from Iran’s persecuted Gonabadi Dervish religious minority, is being subjected to torture and other ill-treatment, including through the denial of specialist medical care. He is a prisoner of conscience serving a two-year prison sentence in Tehran’s Evin prison for attending a peaceful protest. 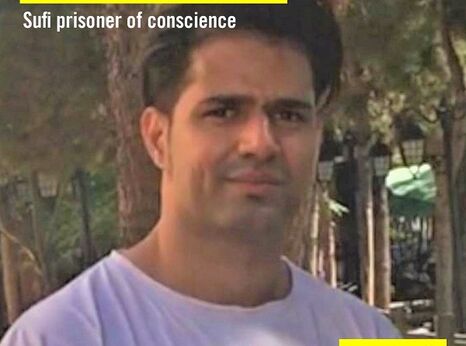 Behnam Mahjoubi, from Iran’s persecuted Gonabadi Dervish religious minority, is being subjected to torture and other ill-treatment, including through the denial of specialist medical care. He is a prisoner of conscience serving a two-year prison sentence in Tehran’s Evin prison for attending a peaceful protest.

Behnam Mahjoubi was arrested following a violent crackdown by security forces on hundreds of Gonabadi Dervishes, both men and women, who had gathered peacefully on 19 February 2018. The peaceful gathering was outside the residence of their spiritual leader Noor Ali Tabandeh, in an area of Tehran known as Golestan-e Haftom, to protest against the authorities’ intensified persecution of their community, prevent the arrest of their leader and call for the release of detained Gonabadi Dervishes. Those present at the protest reported that police and plainclothes Basiji paramilitary forces resorted to beating the protestors with batons, electric cables and sharp objects, and used tear gas, water cannons and live ammunition to disperse the crowd, violently arresting over 300 men and women. Those present reported that security forces raided a nearby five-storey apartment building to which the protesters had escaped, fired tear gas into the staircases, formed a “tunnel” of batons and struck protesters repeatedly on their backs, heads and faces as they violently dragged them down the stairs and into police vans. Pictures and videos from the incident and its aftermath show protesters with lacerations and other wounds to their faces and bodies and bandaged heads and other body parts.

In relation to this incident, more than 200 Gonabadi Dervishes were sentenced to a total of 1,080 years in prison, 5,995 lashes as well as internal “exile”, travel bans, and bans on joining political and social groups. In Behnam Mahjoubi’s court verdict, the prosecution had cited peaceful activities protected under international human rights law as evidence of criminal activity. The court cited activities such as his peaceful participation at the protest, his forced “confessions” admitting his attendance in what the prosecution called an “illegal” protest, and his alleged membership of online groups that report on human rights violations perpetrated against Gonabadi Dervishes to convict him.

Since his imprisonment, Behnam Mahjoubi has undertaken several hunger strikes. Amnesty International understands that the prison authorities often delay giving his medication to him for several weeks after his family have taken it to the prison. He went on his first hunger strike on 31 July 2020 and ended it three days later after the prison authorities promised to provide him with his medication. He went on hunger strike again around mid-August for 12 days in solidarity with human rights lawyer Nasrin Sotoudeh who was on hunger strike demanding the release of prisoners of conscience amidst the spread of COVID-19 in Iran’s prisons. Earlier in the year, the Iranian authorities had temporarily released around 128,000 prisoners on furlough and pardoned another 10,000 in response to COVID-19, but hundreds of prisoners of conscience were excluded. Behnam Mahjoubi’s 12 day hunger strike in August 2020 severely weakened him and eventually led to him collapsing in prison, after which he was taken to hospital but was returned to prison the same day, despite doctors recommending that he be admitted for several days, according to informed sources with knowledge of his case. During the last week of September 2020, Behnam Mahjoubi suffered from seizures, resulting in his head being knocked to the ground and temporary paralysis on the left side of his body. Sources with knowledge about his case told Amnesty International that a doctor in the prison clinic had pressured him to take sleeping tablets to treat his panic disorder but that they may have been incompatible with his prescription medication and may therefore have contributed to his seizures. Although the prison authorities had promised to take him to a regular hospital to examine him following his seizures, on 27 September 2020, they instead forcibly transferred him to Aminabad psychiatric hospital where he was forcibly injected with chemical substances against his will. He went on hunger strike on 29 September 2020 in protest at his enforced detention in the psychiatric hospital. He was returned to the prison after six days in hospital and ended his hunger strike two days later. Following his return to the prison, his health declined; the left side of his body had become numb, his legs had become swollen, and he was unable to walk without a walking aid. Consequently, on 29 October 2020, he began another hunger strike and, two days later, on 31 October 2020, the prison authorities again forcibly transferred him to Aminabad psychiatric hospital but falsely informed his family that they were taking him to a regular hospital. According to information available to Amnesty International, the doctors in the psychiatric hospital threatened Behnam Mahjoubi that if he did not end his hunger strike, they would give him electric shocks. He was returned to prison on 2 November 2020 and ended his hunger strike the next day. His health has continued to decline since.

The Gonabadi Dervish religious minority are members of Iran’s largest Sufi order and consider themselves Shi’a Muslims. They describe Sufism as neither a religion nor a sect, but rather a way of life by which people – from any religion – may find God. The Iranian authorities have persecuted them because of their faith, and they have persistently subjected them to discrimination, harassment, arbitrary arrest and detention, imprisonment and flogging sentences, and attacks on their sacred or important sites, including prayer houses.