Viachaslau Rahashchuk is a taxi driver from the Belarusian city of Pinsk who was arbitrarily detained, tortured and later sentenced to six years in prison. He has remained behind bars since 10 August 2020 and remains in need of urgent medical treatment as a result of torture and other ill-treatment in detention. 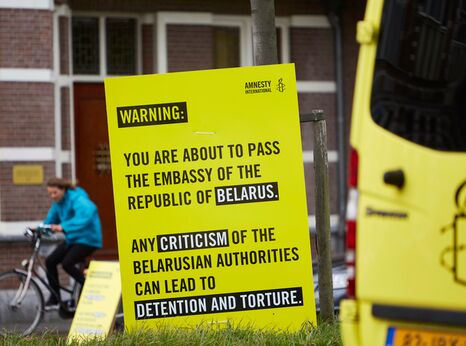 Viachaslau Rahashchuk is a taxi driver from the Belarusian city of Pinsk who was arbitrarily detained, tortured and later sentenced to six years in prison. He has remained behind bars since 10 August 2020 and remains in need of urgent medical treatment as a result of torture and other ill-treatment in detention.

Viachaslau Rahashchuk is one of the 14 people of the so called ‘Pinsk case’ who were sentenced to lengthy prison terms for taking part in ‘mass riots’. Those people either participated in peaceful post-election protests or happened to pass by the area in which the protests took place. They were violently arrested and tortured, accused of throwing objects at police and destroying property and later sentenced to prison terms and ordered to collectively pay over 65 thousand euro in damages to the city and the 109 police officers that have testified as victims in court. According to credible reports, the 109 police officers have claimed to lose sleep and appetite after peaceful protests on 9 and 10 August 2020. If this sum is not paid collectively by the ‘Pinsk case’ prisoners, all their property will be confiscated 30 days after the appeal hearing that took place on July 6. One of the ‘Pinsk case’ prisoners is a mother of five children.

The ‘Pinsk case’ is representative of the widespread and egregious human rights violations that continue against those in Belarus who express dissent, or are suspected of showing dissent, or those the authorities want to target, following the beginning of mass peaceful protests against the widely contested results of the presidential election on 9 August 2020. Belarus is facing its most serious human rights crisis in its post-independence history.

Opposition activists, journalists and bloggers, those expressing dissent, peaceful protesters and, as in the case of Viachaslau Rahashchuk, by-standers, have been swept up in their thousands by law enforcement officers, many of whom operate in plain clothes, with no identifying insignia and often using excessive force. Current estimates are that over 30,000 people have been detained since 9 August. Thousands have faced proceedings under the Code of Administrative Offences resulting in fines or periods of “administrative detention” up to 15 days which can be imposed consecutively leading to much longer periods of detention. Over 3,000 people have been prosecuted under criminal charges related to mass events and protests, with hundreds already sentenced to long terms of imprisonment. All those who have been targeted solely for exercising their human rights must be immediately and unconditionally released.

Local and international human rights organizations have collected hundreds of testimonies of detainees who have been subjected to torture and other ill-treatment at the time of arrest, during transportation and while in pretrial detention. As yet, not a single investigation has been opened by the Belarusian authorities against law enforcement officers.