Anwar Khezri, Ayoub Karimi, Davoud Abdollahi, Farhad Salimi, Ghassem Abesteh, Kamran Sheikheh and Khosrow Basharat, all from Iran’s Kurdish Sunni minority, are at risk of execution at Raha’i Shahr prison, near Tehran. They were convicted of “corruption on earth” (efsad-e fel-arz) and sentenced to death in grossly unfair trials marred by claims of torture to extract “confessions”. 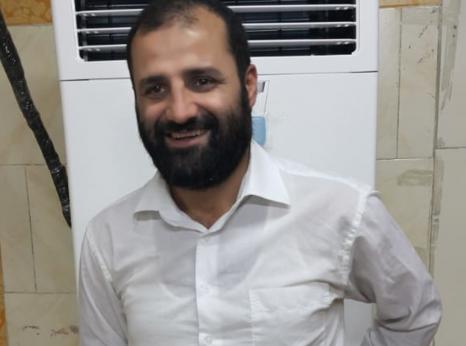 Anwar Khezri, Ayoub Karimi, Davoud Abdollahi, Farhad Salimi, Ghassem Abesteh, Kamran Sheikheh and Khosrow Basharat, all from Iran’s Kurdish Sunni minority, are at risk of execution at Raha’i Shahr prison, near Tehran. They were convicted of “corruption on earth” (efsad-e fel-arz) and sentenced to death in grossly unfair trials marred by claims of torture to extract “confessions”.

Following their arrests, the seven men were held separately in a Ministry of Intelligence detention facility in Urumieh before being transferred to prisons in West Azerbaijan province. Between late 2010 and 2012, they were separately transferred initially to Tehran’s Evin prison and then to Raja’i Shahr prison. In an open letter written in August 2019, Farhad Salimi described how these multiple transfers in themselves caused him mental distress, as each transfer meant adjusting to new prison guards, prisoners and systems. After spending over six years in pre-trial detention, they were first sentenced to death in late May 2016 for “corruption on earth” by Branch 28 of the Revolutionary court of Tehran. The Court also convicted them of national security offences for their alleged “membership in Salafist groups”, which Ministry of Intelligence agents alleged included al-Qaeda, the Taliban and Kurdish opposition groups. The trial was grossly unfair and consisted of one hearing in mid-March 2016 that lasted just five minutes. On appeal to Branch 41 of the Supreme Court, their sentences and convictions were overturned around March 2017 and the Court remanded their cases to Branch 15 of the Revolutionary Court for re-trial. In an open letter from February 2020, Farhad Salimi wrote that around this time he was repeatedly put under pressure to make forced “confessions” to incriminate himself and to dismiss the lawyer of his own choosing. In mid-2018, Branch 15 of the Revolutionary Court of Tehran convicted all seven men of “corruption on earth” and sentenced them to death. On 3 February 2020, on appeal, Branch 41 of the Supreme Court upheld their convictions and sentences. In a separate case, on 19 September 2017, Anwar Khezri, Kamran Sheikheh and Khosrow Basharat were transferred from Raja’i Shahr prison to Urumieh prison to stand trial before a criminal court in Urumieh for murder. In early July 2018, this court convicted Kamran Sheikheh of murder and sentenced him to death as well as to 10 years’ imprisonment, and Anwar Khezri and Khosrow Basharat were convicted of complicity to murder and sentenced to 10 years’ imprisonment.

In his open letter written in February 2020 to the then Head of the Judiciary, Ebrahim Raisi, Anwar Khezri outlined the multiple serious human rights violations to which he was subjected by Ministry of Intelligence agents, judges and prison authorities. He described being taken out of his cell while blindfolded and handcuffed and subjected to a mock execution in August 2017. No investigations are known to have been conducted into his and others’ claims of torture.
Under international human rights law and standards, all proceedings in capital cases must scrupulously observe fair trial standards, and particularly in view of the irreversible nature of the death penalty. All individuals who risk facing the death penalty must benefit from the services of competent defence counsel at every stage of the proceedings. They must be presumed innocent until their guilt has been proved based upon clear and convincing evidence leaving no room for an alternative explanation of the facts, in strict application of the highest standards for gathering and assessing evidence. In addition, all mitigating factors must be taken into account. The proceedings must guarantee the right to review of both the factual and the legal aspects of the case by a higher tribunal. Imposition of the death penalty following criminal proceedings that fall seriously short of fair trial standards constitutes an arbitrary deprivation of the right to life and may amount to an extrajudicial execution, a crime under international law.

Ethnic minorities in Iran, including Kurds, Ahwazi Arabs, Azerbaijani Turks, Baluchis and Turkmen face discrimination which curtails their access to education, employment and political office. Ethnic minorities, including Kurds, are also disproportionately affected by death sentences imposed for vague charges such as “corruption on earth” and also being executed in secret with the authorities then refusing to return their bodies for burial to their families. Additionally, religious minorities, including Sunni Muslims, Baha’is, Christians, Gonabadi Dervishes, Jews, and Yaresan suffer discrimination in law and practice, including in access to education, employment, child adoption, political office and places of worship. Authorities also subject religious minorities to arbitrary detention, unjust prosecutions, torture and other ill-treatment for professing or practising their faith.