Eight members of the Municipal Committee for the Defence of Common and Public Assets (CMDBCP), prisoners of conscience, continue in pre-trial detention in Yoro (North Honduras) after more than 28 months. Their arbitrary detention is solely for standing up in defence of protected water sources in danger by a mining project. The trial against the eight defenders restarted on 13 January 2022. We urge authorities to drop the charges against the eight human rights defenders and release them immediately and unconditionally. 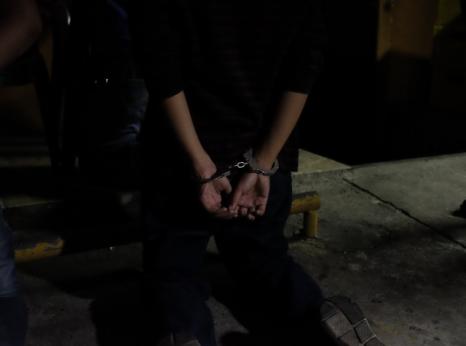 Eight members of the Municipal Committee for the Defence of Common and Public Assets (CMDBCP), prisoners of conscience, continue in pre-trial detention in Yoro (North Honduras) after more than 28 months. Their arbitrary detention is solely for standing up in defence of protected water sources in danger by a mining project. The trial against the eight defenders restarted on 13 January 2022. We urge authorities to drop the charges against the eight human rights defenders and release them immediately and unconditionally.

The Municipal Committee for the Defence of Common and Public Assets (CMDBCP), composed of several organisations defending land and environmental rights, has mobilized since 2015 against two concessions granted by the Honduran Institute of Geology and Mines (INHGEOMIN) to the mining company Inversiones Los Pinares (ILP) in Carlos Escaleras National Park (formerly known as Botaderos Mountain), located in the municipality of Tocoa, northern Honduras. The CMDBCP filed criminal complaints against officials from INHGEOMIN, the Honduran Forest Conservation Institute, the Ministry of Environment and the municipal mayor of Tocoa, for abuse of authority and environmental crime due to the exploitation of the core zone of the protected area, where the water sources on which the communities' water supply depends are located.

Given the lack of progress in the CMDBCP's demands, on August 1, 2018, it established the "Guapinol camp" as a form of peaceful protest on a public road. It remained for almost three months until a violent eviction carried out by Honduran authorities on 27 and 28 October. The prosecution case against the eight defenders relates to a dispute that took place on 7 September near to the protest encampment, in which a ILP security staff reportedly shot one of the protesters and in response, protesters retained a contractor before handing him over to police. The shooting of the protester was never investigated, but the ILP reported the retention of the contractor and the burning of a rented car and two ILP shipping containers during the disturbances. Members of the CMDBCP have faced two criminal proceedings since 2018. In March 2019, a judge dismissed the charges against 12 of them accused of aggravated arson and unlawful deprivation of liberty, and illicit association and usurpation and damages in a first warrant. However, the public prosecutor filled an appeal. On August 13, 2020, a court overturned the dismissal in favor of 5 of the 12 defenders, so these men could face a new trial and be sent back to pre-trial detention. The first accusation included 18 people. Fourteen of them are in the second indictment involving 31 people.

José Daniel Márquez, Kelvin Alejandro Romero, José Abelino Cedillo, Porfirio Sorto Cedillo, Ewer Alexander Cedillo, Orbin Nahún Hernández and Arnol Javier Alemán, voluntarily presented themselves at the San Pedro Sula court on August 21, 2019. They were not received but sent to Tegucigalpa. On August 26, the hearing of the accused took place in Tegucigalpa, where the judge decreed the judicial detention. On September 1, the court charged them with unlawful deprivation of liberty and aggravated arson and ordered their preventive detention but acquitted them of the crimes of illicit association and aggravated robbery. On November 29, after having spent more than two months in a high security prison, the authorities transferred them to the Olanchito Penal Center, where they have remained ever since. Jeremías Martínez Díaz has been held at the La Ceiba Prison since December 5, 2018. He was arrested on November 29, 2018, by police officers providing him with protection granted by the National Protection Mechanism for human rights defenders. He was taken to court in San Pedro Sula, as his name appeared on the first arrest warrant, of which he was acquitted in March 2021. He is still being held on charges of the second arrest warrant. To date, several appeals against the detention of the eight defenders and habeas corpus writ requesting an alternative measure were declared inadmissible or are yet to be resolved.

Following a visit on 16 April 2020 to the Olachito Penal Centre, the National Mechanism and Committee for the Prevention of Torture and Other Cruel, Inhuman or Degrading Treatment requested a review of the preventive detention of the seven Guapinol defenders. In 2020, the UN Working Group on Arbitrary Detention concluded that there is no legal reason for the use of pre-trial detention in the case of the eight defenders and emphasizes the risk they are facing in the context of COVID-19. The Working Group asked for their immediate release and redress, and to investigate those suspected of criminal responsibility for their illegal detention. Previously, UN human rights experts recommended all states to consider alternatives to imprisonment, to reduce risks of spreading COVID-19, particularly for persons in pretrial detention or detained without legal basis. On 12 March 2021, local organizations confirmed that José Daniel Márquez tested positive for COVID-19. He was isolated and now is back in the Olanchito prison. Honduras faces a serious problem of overcrowded jails for years. The Inter-American Commission on Human Rights regularly expresses concern about the conditions of detention in Honduras, which present a risk to the life and integrity of persons deprived of their liberty due to lack of hygiene, sanitary facilities and decent places to sleep, negligent medical care, insufficient food, and poor and inadequate access to water.