Tortured Swedish-Iranian academic Ahmadreza Djalali, arbitrarily detained in Tehran’s Evin prison, is at risk of imminent execution according to multiple Iranian state media reports that his death sentence for “corruption on earth” (efsad-e fel-arz) will be carried out by 21 May 2022 at the latest. He was sentenced to death in 2017 following a grossly unfair trial that relied on torture-tainted “confessions.” The authorities must halt any plans to execute him and release him immediately. 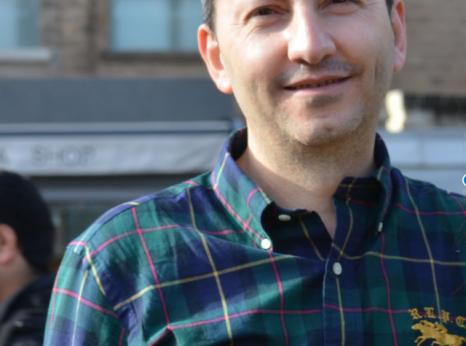 Tortured Swedish-Iranian academic Ahmadreza Djalali, arbitrarily detained in Tehran’s Evin prison, is at risk of imminent execution according to multiple Iranian state media reports that his death sentence for “corruption on earth” (efsad-e fel-arz) will be carried out by 21 May 2022 at the latest. He was sentenced to death in 2017 following a grossly unfair trial that relied on torture-tainted “confessions.” The authorities must halt any plans to execute him and release him immediately.

On 4 May 2022, several major state media outlets in Iran simultaneously published identical articles which stated that according to “informed sources, Ahmadreza Djalali’s death sentence has been taken up for implementation and the sentence shall be carried out, at the very latest, by the end of Ordibehesht [21 May 2022].” These articles were published just days after the prosecution authorities in Sweden sought a sentence of life imprisonment for a former Iranian prison official, Hamid Nouri, for his alleged involvement in Iran’s 1988 prison massacres in which thousands of political dissidents were forcibly disappeared and extrajudicially executed in secret. The media outlets stated that according to “some political analysists… in carrying out the sentence of Ahmadreza Djalali, the government of Iran will not only implement a binding judicial order but also bar the government of Sweden from undertaking further actions similar to the detention of Hamid Nouri.” State media reports in Iran concerning high profile political cases are widely known to be issued in close coordination with the country’s judiciary and its intelligence and security apparatus.

Ahmadreza Djalali is a medical doctor and academic who was living in Sweden and on a business trip to Iran when he was arbitrarily arrested on 26 April 2016. He was held in Evin prison for seven months in section 209, which is under the control of the Ministry of Intelligence. He was held for three months in prolonged solitary confinement, without access to a lawyer. In a letter written from prison in August 2017, Ahmadreza Djalali said that during this period he was subjected to torture and other ill-treatment in order to force him to “confess” to being a spy. This included threats to execute him, kill or otherwise harm his children, who live in Sweden, and his mother, who lived in Iran and died in 2021. He has said that he was forced to read out “confessions” pre-written by his interrogators in front of a video camera. Ahmadreza Djalali denies the accusations against him and says they have been fabricated by the authorities. In the same letter written from inside prison in August 2017, Ahmadreza Djalali said he was held solely because of his refusal to use his academic ties in European institutions to spy for the Iranian authorities. On 17 December 2018 Iran’s state-run TV aired Ahmadreza Djalali’s “confessions” during a programme titled Axing the root, which used dramatic music, graphics and international news footage interspersed with Ahmadreza Djalali’s “confessions”, along with a voiceover presenting him as a “spy”. By extracting and airing these forced “confessions”, Iranian authorities violated Ahmadreza Djalali’s right to the presumption of innocence as well as the right not to be forced into incriminating himself. Ahmadreza Djalali has since said the broadcast “confessions” were filmed while he was being held in solitary confinement, without access to a lawyer.

In November 2017, the UN Working Group on Arbitrary Detention called on Iran to release Ahmadreza Djalali immediately and accord him an enforceable right to compensation and other reparations, as he had been detained without an arrest warrant, was only formally charged 10 months after his arrest, and had been “effectively prevented from exercising his right to challenge the lawfulness of his detention”. They also found that his right to a fair trial had been violated so gravely “as to give Mr Djalali’s deprivation of liberty an arbitrary character”.

Amnesty International has documented a pattern of systematic fair trial rights violations in Iran, beginning from the time of arrest right up until when defendants stand trial. Detainees are often arrested without warrants and held in prolonged solitary confinement in undisclosed locations without access to their families. Individuals detained, investigated and prosecuted are subjected to grossly unfair judicial proceedings, including in cases involving politically motivated charges. Prosecution authorities and interrogators belonging to security and intelligence bodies, including the ministry of intelligence, systematically deny detainees their right to access a lawyer from the time of arrest and during the investigation phase. Torture and other ill-treatment are widespread and systematic, especially during interrogations. Iran’s police, intelligence and security forces, and prison officials have subjected detainees to prolonged solitary confinement, beatings, floggings, suspension, forced administration of chemical substances, electric shocks and sexual violence. Amnesty International has also documented how prison and prosecution authorities have deliberately denied prisoners access to adequate health care and committed violations of the right to life by deliberately denying ailing prisoners lifesaving healthcare and refusing to investigate and ensure accountability for unlawful deaths in custody.

Amnesty International opposes the death penalty in all cases without exception regardless of the nature or circumstances of the crime; guilt, innocence or other characteristics of the individual; or the method used by the state to carry out the execution. The death penalty violates the right to life as proclaimed in the Universal Declaration of Human Rights.