Repression and injustice in the United Arab Emirates 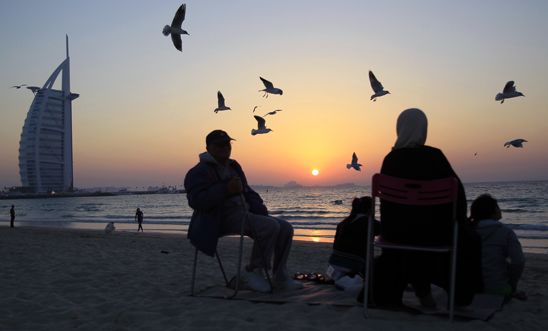 The Palm Jumeirah beach in Dubai. In the background is the Burj Al Arab hotel. © REUTERS

“This is a dictatorship. The royal family think they own the country, and the people are their servants. There is no freedom here.”
Dr Mohammed al-Mansoori, lawyer in the UAE

Think of the United Arab Emirates (UAE) and you are likely to picture glittering skylines of wealthy cities and perfectly crafted beaches – a man-made paradise developed by an affluent nation in its economic prime.

But there are few outspoken activists sunning themselves on Sharjah’s beaches, no human rights lawyers wandering the shopping malls of Dubai – many, if not all of them have been imprisoned or silenced if they give any hint of supporting democratic rights that conflict with the views of the UAE’s rulers.

In 2011, people took to the streets en masse to demand change in many Middle Eastern and North African countries in the so-called ‘Arab Spring’. From demonstrations in the streets of Tunis to sit-ins in Cairo’s Tahrir Square – people were demonstrating their frustrating with their political rulers and the way they were governing.

In March of the same year, while political change was sparking protests across the region, 133 people in the UAE signed a petition which they handed to the country’s authorities. They were prominent UAE citizens – judges and lawyers, academics and journalists. A small number of them were women.

They called for a start to democratic reform to replace the current monarchy. They asked for everyone to be given a vote, and for an elected parliament to represent and answer to its people in the UAE.

The authorities responded by harassing or imprisoning many of the signatories, whose calls for democratic reform in the UAE have been muffled, then silenced altogether.

Authorities shut down all dissent

In the last three years, the UAE authorities have silenced criticism from their citizens like never before. They have done this through arbitrarily arresting and detaining people on spurious charges – breaking their own laws in the process, torturing detainees, putting them through unfair trials and sentencing them to years behind bars simply for speaking out. The families of those who speak out have been harassed and persecuted by authorities.

More than 100 peaceful activists and critics of the UAE government have been imprisoned on broad and vague national security-related charges since 2011. At least 67 of them remain in prison today.

A decade in prison for defending human rights

Human rights lawyer and university professor Dr Mohammed al-Roken has already served one year in an Abu Dhabi prison for being associated with ‘an organisation that attempted to overthrow the government’, after he spoke in favour of democratic reform. Mohammed has nine more years in prison to go.

Mohammed was arrested along with his son and son-in-law in July 2012. State Security officers took books and laptops along with family photographs and left with Mohammed, where they took him to a secret location and kept him in solitary confinement for three months. His family did not know what had happened to Mohammed until he resurfaced in detention months later.

The next year, Mohammed was convicted and sentenced for criticising the government under the 'UAE 94' mass trial. He wasn't allowed to see any documents relating to his case until the second hearing of his trial. He is a prisoner of conscience and should be released immediately.