2011 uprising in the Middle East and North Africa 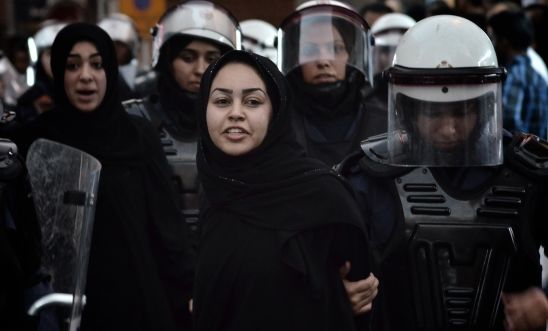 A Bahraini protester is detained by riot police during an anti-government demonstration in the capital, 2012 © MOHAMMED AL-SHAIKH/AFP/GettyImages

There was little about Mohamed Bouzazi’s life to suggest that he would become a key figure in world history. But on 17 December 2010, in a small town in central Tunisia, the 24-year-old street vendor carried out a silent and tragic act of defiance that was to trigger protests across the Middle East and North Africa, ensuring that the region would never be the same again.

Unable to find work, Mohamed struggled to eke out a living by selling fruit and vegetables from a handcart. When a local official accused him of trading without a permit and confiscated his only source of income, apparently also hitting and insulting him, Mohamed went to complain to the Governor of the town.

It is unclear exactly what happened next but some sources say that the Governor refused to meet him, and that this proved one insult too far. Whatever happened, it is clear that Mohamed, despairing at his situation, publicly set himself on fire in protest.

This act of defiance struck a nerve within the local community. It unleashed their frustration over the harsh conditions of their lives – the lack of jobs, amenities and other basic services – and their fury over their relentless marginalisation into poverty by a government that just did not care. Protests soon spread across the country as men, women and children took to the streets to demand change.

Just under a month later Ben Ali, who had ruled Tunisia for 23 years, stepped down. Soon the whole of the Middle East and North Africa shook, as ordinary people summoned up the courage to protest against oppressive regimes across the region, many of which had been in place for decades.

Protests spread across the Middle East

Mohamed’s injuries proved fatal before he could see the maelstrom of popular fury that his act triggered. That maelstrom succeeded, in turn, in toppling the long-standing rulers of Tunisia, Egypt, Libya and Yemen who, until 2011, had seemed invincible.

But this was not without great human cost. The authorities hit back hard. They reacted to peaceful protests with brutal force, killing thousands of protestors and injuring many more. Some protestors were arrested on arbitrary charges others simply ‘disappeared’.

Years on and, while the protest movements in Tunisia, Egypt and Libya were successful in ending years of repressive rule, the struggle for real human rights reform continues.

Despite promises for reforms in Bahrain, no real progress has been made. The situation in Syria, meanwhile, has descended into a bloody civil war with both opposition and government forces committing violent human rights abuses.

Throughout this tumultuous time our focus has remained the same – we stand in solidarity with those peacefully demanding change and in defiance against those who try to suppress their demands. We continue to record, respond to and act against human rights abuses in the region and our research has proved fundamental in holding governments to account.

Peaceful protests triumphed, albeit at heavy human cost. Both Tunisia and Egypt continue to struggle with human rights reforms but the discovery of people power has led to a culture of protest in which state forces are finding it harder to oppress with impunity.

Backed by Saudi Arabia, Bahrain faced down protests with violent force, deepening divisions and resulting in a huge number of casualties. Many arrested during the 2011 protests remain behind bars. In response to protests, the authorities promised real reform but it is yet to surface.

Over 100,000 men, women and children have been killed in Syria since protests began there in early 2011. What began as a peaceful cry for freedom has descended into a bitter civil war with both government and opposition forces responsible for horrific human rights abuses.