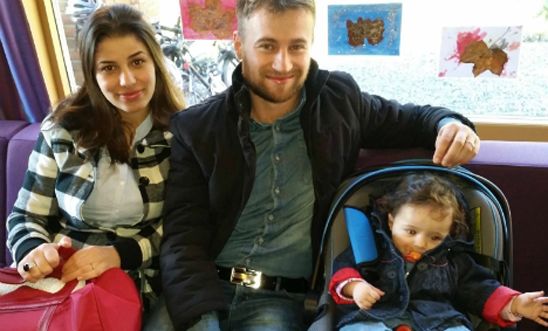 Genci Angjellari is an investigative journalist. In November 2014 he was exploring alleged links between the Albanian mafia, business and politicians when two men on a motorbike attacked him. They punched him, held a knife to his throat and told him to stop his work.

The next day Genci’s wife Fatjona was also approached by two men on a motorbike. They threatened to rape her, and told her they would kill her husband and daughter if he did not stop ‘playing with fire’. Days later the family fled to Norway.

Around 37 Roma families in Albania are being threatened with forced eviction as the land they currently inhabit is targeted for redevelopment. The landowner has refused to respect procedures set out in law, and the authorities have...

We have received word that many Romani families have been subjected to forced eviction in Tirana, Albania. The United Nations state that 'Forced evictions constitute gross violations of a range of internationally recognised human...

The Wisdom of free speech: from Albania to Syria

I’ve got to admit I was never a fan of Norman Wisdom, pratfalls and mugging not being my thing. But then again … there was something interesting about his whole screen persona and his amazing success. Was he a trailblazer for freedom...

On the 20th anniversary of the adoption by the UN General Assembly of the Convention on the Rights of the Child today (20 November), Amnesty International calls on the Albanian authorities to ensure that Children's rights are not placed in orphanages unnecessarily. Amnesty is concerned that poverty remains one of the main reasons for the placement of Children's rights in orphanages in Albania. Many of these Children's rights have a parent or other close relatives, but their families cannot afford to support them. Amnesty is calling on the government to provide greater assistance and support to

Albania: Promises to orphans should be a serious commitment

On the eve of Albania’s Nationals Orphan’s Day on the 20th of May, Amnesty International called upon the government due to be elected in on the end of June to honour the country’s promises to improve provisions for its orphans. The...

Secret Policeman on the loose in Britain. Whodda thought? Well done to my Amnesty colleagues whose persistence appears to be paying off in the case of Remzi Hoxha, who is believed to have died under torture at the hands of the Albanian...

Amnesty International welcomed the court decision today to allow the extradition of Ilir Kumbaro, a former member of Albania’s secret police, to face charges of abduction and torture in his home country. Kumbaro has spent the last 13 years living in the UK under a false identity, having successfully applied for asylum and subsequently gained British citizenship.The court found that the defendant is indeed Ilir Kumbaro and that his extradition to Albania would not breach his human rights. The case has now been referred to the Secretary of State to rule on his extradition.Amnesty expects that