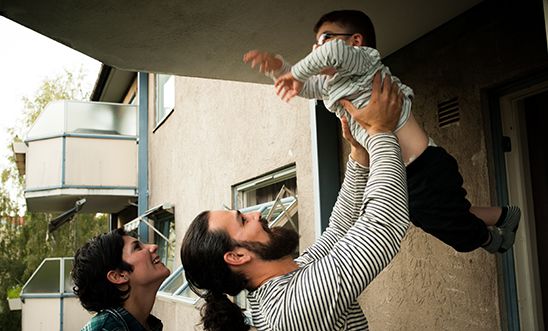 Syrian refugees Hennan, Kahraman and Sherihan having fun on the balcony in Oslo, Norway. © Amnesty International

Resettlement is a lifeline open to some of the world’s most vulnerable refugees. A young family from Syria tells us what a huge difference moving to Norway has made in their lives.

'They said: ‘We have a gift for you. You can come to Norway!’ We didn’t know anything about Norway, but we were so happy.'

In a bright apartment in a modest 1950s building in a quiet corner of Oslo, Norway, she and her husband are teasing each other.

'This is how I see Norway,' says Hennan, an artist aged 31: 'Children come first, then the woman, then the dog, and at last the man!' They both laugh.

The happy scene is a million miles away from what they left behind in Aleppo, Syria.

'Those days were hard,' says Hennan. 'I saw a man being shot by snipers on the way from the bakery. He was carrying a loaf of bread above his head to show that he was unarmed. Around his dead body there were blood-spattered pieces of bread. I saw a woman gathering the pieces, she probably had hungry children at home.'

'Most of my new sketches are sad,' Hennan adds, 'because they’re based on our experiences of war.' Image: Hennan looking at some of his new sketches. He had to leave all of his artwork behind in Aleppo.

'In Aleppo our life was simple,' says Sherihan. 'We went to work, made dinner, and spent time with family or friends. I played the flute at a music institute. I had many dreams. We were saving up to buy a nice car and big house - a place to raise a child. You know, stuff that everyone wants.'

'I loved to be at home, discussing politics with my friends or reading,' says Hennan. 'I had around 700 books. Some were illegal, about religion or politics, or in Kurdish [a minority language banned in Syrian schools, workplaces and books].'

'Our apartment was right on the border between the opposition and government areas. One day someone shot and killed our neighbour, just because they thought he supported Assad [Syria’s President]. We moved to the countryside,' continues Sherihan.

'It was cold, and there wasn’t a lot to eat, and no water or electricity. I was pregnant by then. We couldn’t think about the future, we only had the capacity to survive.' 'When Kahraman was a few months old, we noticed that he wasn’t responding well to our movements,' Sherihan continues.

'A doctor told me he was blind and would be for his whole life. I was devastated. I decided to go back to Aleppo to get a second opinion. It took 13 hours and I had to cross a street where snipers had shot and killed many people. I took Kahraman in my arms, and then I ran.

'The doctor gave me some hope, but said we would have to bring Kahraman back to Aleppo for regular check-ups. That’s when we decided to go to Turkey.'

'Turkey was even more difficult than Syria. We stayed for nine months in a small flat with three other families. Hennan worked all day for next to nothing. We couldn’t get Kahraman the medical care he needed. It was the worst time of my life.'

After registering with UNHCR, the UN’s refugee agency, the young family were told that they qualified for resettlement.

'One day we were told that the Norwegian Directorate for Immigration wanted to interview us,' says Sherihan.

Two months later, they were finally on their way to safety.

'We travelled light, carrying only our most prized possessions: the laptop with pictures of Hennan’s artwork and our life, and my flute,' says Sherihan.

'I remember the very moment we touched ground in Oslo, on 23 September 2014. It was such an important moment – we were safe at last!'

'Norway is very different to Syria,' Hennan says. 'The climate is even colder than we expected. But when we found Kurdish literature in the library, we knew we had come somewhere where freedom was a reality.' Image: Sherihan inspecting her flute, one of the few belongings she could take with her when the family fled the war in Syria.

Hennan shows us pictures of Sherihan playing the flute at their wedding in 2010, in a white dress with lace detailing.

But they are starting to settle down. Both now speak Norwegian fluently. Two-year-old Kahraman is a little anxious around other children in kindergarten because of his poor eyesight. But he keeps asking for his new friend, Mina, and maneuvers around his apartment at high speed.

'Our Norwegian friends never ask us why we don’t go to the mosque, or make remarks if we have a beer or two,' Sherihan says.

'They never judge. But they are obsessed with bike helmets! One friend is constantly on my back for not using one,' she smiles.

They still have family and friends in Syria: 'My only hope is that the war will end soon,' says Hennan. 'Until it ends, people will be forced to flee. The global community must do more to stop the war.'

'Every country should welcome refugees and the numbers should be balanced and fair,' adds Sherihan.

'If I were to wish for something, it would be a job, independence, and to be with our loved ones,' says Sherihan.

'A normal life in safety – it’s as simple as that.'

Please take action: tell your MP that refugees are welcome in the UK