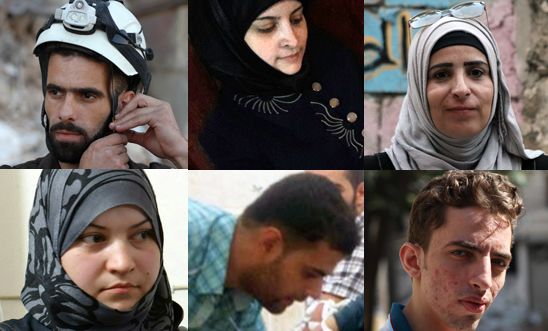 The people trapped in Eastern Aleppo live in constant fear.

Since the ceasefire collapse on 19 September this year, Eastern Aleppo has been subjected to relentless attacks from Syrian government forces with Russian support. They claim to be targeting opposition armed groups, but the areas struck are away from the frontlines, military vehicles or checkpoints. Instead, it is homes, hospitals, schools, markets and mosques that are under attack.

Clearly, civilians are the target.

Here are some of those civilians still living in Eastern Aleppo.

They told us about the struggle to keep their families and communities alive, as the city around them is pounded to rubble.

Take action: Call on the UK government to protect children in Aleppo "I get strength from the very essential values of our revolution"

Thawra is 41 years old, and married with children. She lives with her family in East Aleppo.

"Before the revolution I had a shop selling women’s clothes and looked after my children.

"Now I am a principal at a kindergarten and run first aid courses and awareness campaigns for women, so they know what to do before, during and after a shelling.

"I volunteer at the kindergarten, but I am paid for the first aid courses and awareness campaigns. There are some people who work as volunteers.

"We live in hard conditions. I get strength from the very essential values of our revolution, the values that we will always stick to until we win." "When I rescue a soul from death, I forget all the tiredness I am feeling"

31 years old, married with three children. Has sent his family to the countryside outside Aleppo, but he stays in the city.

"I work as a manager at the Syrian Civil Defense Center in Al-Ansary district in Easter Aleppo. Before the revolution, I worked as a plumber.

"I have been living with my family here in Eastern Aleppo for five years, but when the siege on Eastern Aleppo broke down, I sent them to Ourem in the countryside of Aleppo. That was three months ago, and I haven’t seen them since.

"Here at the Syrian Civil Defense we do not have fixed salaries. Sometimes we get rewards.

"When we did not have equipment it was heart-breaking to see people stuck under the wreckage and not be able to help them. Now that we have good equipment to help us rescue people it’s better.

"When I rescue a soul from death, I forget all the tiredness I am feeling. That is what gives me strength to continue working in these hard conditions, and as god says 'To save a life is to save all of humanity.'" Rana is 29 years old, single and lives with her family in Eastern Aleppo.

"I used to work as a teacher before the revolution. Nowadays I work as a journalist for Hiber newspaper and as an administrator for an educational institute. I get 100 US dollars a month.

"I work to spread the truth of what is happening in Syria and particularly in Eastern Aleppo throughout my reports.

"What gives me strength is my people, the people that are still protesting and fighting for freedom, peace, decent life and dignity." "I just want education to continue"

34 years old. Nasem has two children in school and lives with her mother, two brothers and two sisters – who all work in education.

"What gives me strength to continue in my work and my life is the need of this generation of children for education. I just want the process of education to proceed.

"I want to put a smile on people’s faces and help them get back what they have lost during the revolution." "As long as I can help other people here, I will not leave my city"

"I used to work for a clothing company. After the revolution, I took a few courses in nursing, and now I work in the Blood Bank, and as a supervisor for the Qatari Red Crescent. We work in difficult conditions and we go through a lot of danger to provide blood for injured people.

"I am happy with my work despite the risks. I feel happier when I rescue an injured person.

"As long as I can help other people here, I will not leave my city." "We started the revolution for a reason"

"Before the revolution I was a student, and now I work in media, film and sometimes I act. I get 100 US dollars a month.

"I still live here because we started the revolution for a reason, for a decent life for us and for our children, and we will not leave at all."

All images and testimonies supplied by Lamba Productions for Amnesty International UK. The outlook for civilians in Syria could not be grimmer. All this year, as bombs fell on cities, towns and villages, the UN Security Council remained deadlocked. Russia constantly used its veto to protect the Syrian government, thus not only preventing international action to protect civilians but also ensuring impunity for war crimes by all parties.

UN efforts to broker peace were unsuccessful. International negotiations led by the USA and Russia also failed. The Syrian government pursued its strategy of collective punishment and forced displacement. Syrian civil society groups are still growing, albeit mostly outside the country.

Human rights investigators, such as the independent international Commission of Inquiry on Syria, are barred by the government from entering Syria. Nevertheless, they continue to monitor and report on violations of international law committed by all parties to the conflict.

US-led coalition air strikes against ISIS and other armed groups in Syria killed scores of civilians this year. Russian air strikes in support of the Syrian government killed hundreds.

We are calling on the UK and its partners to develop a new strategy which genuinely protects civilians in Syria.

Take action: Call on the UK government to protect children in Aleppo