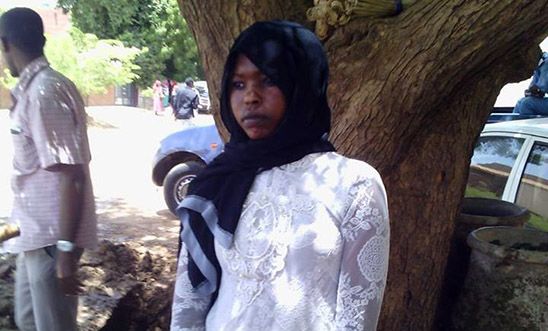 On 16 August 2015, Ferdous Al Toum was found guilty of ‘indecent or immoral dress’ and sentenced to 20 lashes and a fine of 500 Sudanese pounds.

She was arrested along with 11 other young women on 25 June who were leaving a church ceremony at the Evangelical Baptist Church in Khartoum North.

The women were all wearing skirts or trousers, yet were accused of ‘indecent or immoral dress’. After they were arrested, the women were kept in the police station for over 24 hours, where they say they were subjected to degrading treatment and humiliating verbal abuse.

Charged again for her clothing

Ferdous was not only sentenced for her appearance outside the church – she was charged again for the clothes she wore in the courtroom at her trial.

The judge decided to defy all proper legal proceedings by bringing the same charges against her twice, as he believed the dress Ferdous wore to court to be ‘indecent’.

She was sentenced to a large fine for her appearance in court (paid on her behalf by activists and supporters), as well as the lashes.

Following an appeal by Ferdous’ lawyers, her conviction was finally quashed by the Court of Appeal on 14 October 2015.

Thank you to everyone who took action on her case - we believe this result is partly due to activism and international pressure.

‘Indecent or immoral dress’ was outlawed in Sudan in 1991 with the creation of the country’s Criminal Act. Under Article 152, the Public Order Police (known as the ‘morality police’) can arrest a man or woman they believe to be ‘causing annoyance to public feelings’ through their appearance.

‘Whoever commits, in a public space, an act, or conducts himself in an indecent manner, or a manner contrary to public morality, or wears an indecent or immoral dress, which causes annoyance to public feelings, shall be punished, with whipping, not exceeding 40 lashes, or with a fine, or with both.’

Although the law can be applied equally to men and women, in practice women it is disproportionately women who are discriminated against using the Act.

Though they were arrested by a Baptist church in Khartoum, the women are all from the Nuba Mountains in South Kordofan state, home to one of Sudan’s largest Christian communities.

Sudan is a predominantly Muslim country, ruled by Shari ’a law. Christians comprise around 3% of the country’s population.

A lawyer for the women told The Guardian that the women ‘have different traditions and customs from Muslims, and they are being tried because the law is [too] loose’.

Last year, another Christian woman, Meriam Ibrahim, made international headlines when she was sentenced to death for refusing to renounce her Christian faith.

After a high-profile campaign for her release, Meriam was freed just weeks after she was sentenced to hang.