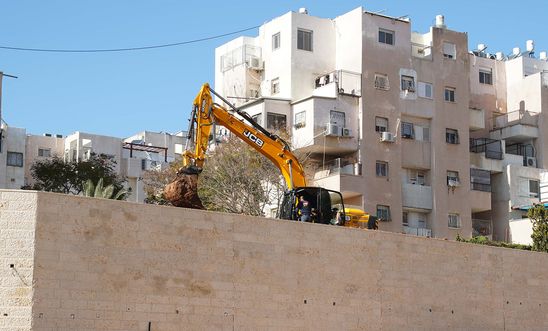 This image was taken on February 2020 in the illegal Israeli settlement of Modi'in Illit in the occupied West Bank. © Amnesty UK

We have partnered up with other organisations to release a joint statement urging the UK Government to take action to end businesses’ involvement in illegal settlements in the occupied Palestinian territory.

Amnesty International UK, Lawyers for Palestinian Human Rights, Quakers in Britain, War on Want and Christian Aid welcome the release of the UN database of businesses involved in illegal Israeli settlements in the occupied Palestinian territory (oPt). The long-awaited publication of this database represents a landmark step towards justice and accountability for those affected by corporate involvement in human rights violations. The database prepared by the UN Office of the High Commissioner for Human Rights is a powerful mechanism to assist states in identifying companies domiciled in their territory, and/or under their jurisdiction, that conduct activities in or related to the settlements. In addition, civil society acting on behalf of those affected by human rights violations now have a clear and authoritative reference to assist their engagement with companies and governments to bring about compliance with their respective human rights responsibilities and obligations.

Business activity in or with settlements unavoidably contributes to sustaining an illegal situation. Land has been seized from Palestinians across the oPt and allocated to regional settlement councils for settlement building and their future expansion. This has shrunk the space available for Palestinians to develop livelihoods and build essential housing and infrastructure, forcing many into poverty. Settling civilians from the occupying country into territories that it occupies violates international humanitarian law and amounts to a war crime under international criminal law.  The companies engaged in settlement activities are profiting from and contributing to systemic human rights violations against Palestinians.

We are therefore concerned to see three UK based companies listed on the UN database. We urge JC Bamford Excavators (JCB), Opodo and Greenkote to fulfil their responsibility to respect human rights by immediately ending involvement in “substantial and material” settlement-related business activity that contributes to their maintenance and expansion.

The UK Government should ensure that it is adhering to its own duty to protect human rights arising from the UK’s treaty obligations and articulated, with regard to companies, in the UN Guiding Principles on Business and Human Rights (UNGPs). In keeping with this, the UK should ensure that these three companies urgently end their involvement in settlement-related activities.

It is therefore regrettable that the UK Government previously objected to the publication of the UN database. It justified this position by stating that the UN Human Rights Council should focus on States, rather than on companies; and also by suggesting that the resolution mandating the creation of the database did not expressly provide for it to be made public. We believe these reasons do not amount to an adequate basis for opposing the database, do not align with the transparency principle of the UNGPs, and should be reconsidered.

The UK helped establish the normative framework under which this issue has been analysed. The UK supported and participated fully in the mandate of the Special Representative of the UN Secretary-General on Human Rights and Transnational Corporations and Other Business Enterprises, created by the UN Human Rights Council.  In 2011, the UK was one of the States that led the call for the UNGPs to be adopted by the Human Rights Council and in 2013 became  the first State to develop a National Action Plan to give effect to this global standard.

We note that the UK Government has repeatedly called on Israel to stop its “counterproductive” settlement expansion, and that it has recently expressed concern regarding the possible annexation of parts of the West Bank. In light of its stated commitment to international law and the UNGPs, the UK Government should now take commensurate action to prevent UK companies from conducting business with illegal Israeli settlements. The UK should also support initiatives, including those within the UN, that draw attention to the involvement of companies in human rights violations. The database’s publication provides an opportunity for the UK and other States to demonstrate a commitment to foster corporate respect for human rights and to counter illegal settlement expansion.

Accordingly, we urge the UK Government to take effective action to end the involvement in illegal Israeli settlements of any UK company thus engaged.

The UN database as it stands does not provide a complete picture of companies involved in illegal Israeli settlements, as acknowledged in the report of the UN High Commissioner for Human Rights. The mandate to produce the database set out by the UN Human Rights Council is restricted to ten well-defined activities. It does not cover all business activity in the occupied Palestinian territory that may raise human rights concerns. In addition, non-business enterprises are excluded from consideration. We suggest that these issues should be addressed in future iterations of the database.

We urge the UN Office of the High Commissioner for Human Rights and the UN Human Rights Council to work together to ensure that this initiative is sufficiently resourced, and updated annually through regular reporting, both to allow new companies to be added when they begin listed activities in settlements, and to remove such companies if they cease their activities.  It is crucial for the database to be a living and transparent instrument that promotes the accountability of companies where there is sufficient evidence of their involvement in settlement activity.