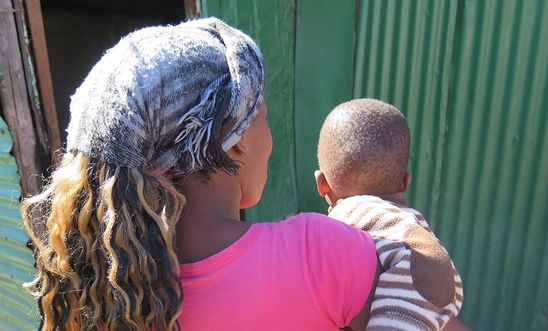 Pregnant women and girls in Mkhondo, South Africa, are dying needlessly because they aren’t getting vital healthcare. A lethal mix of overstretched nurses, ambulance shortages and a lack of support make this one of the worst places in the country to be a new mother.

Maternal mortality rates are sky-high in Mkhondo – it’s one of the worst-performing health districts in South Africa.

Many pregnant women and girls avoid seeking medical care because they fear the lack of privacy. Others are scared off by overworked nurses – too busy to give them the time and patience they need.

Family planning advice isn’t readily available, and many girls find it difficult to make their partner wear a condom – all contributing to one of the highest rates of teenage pregnancies and HIV.

On top of this, the chronic ambulance shortage means pregnant women are often left stranded and alone.

At 16, Gloria suspected she might be pregnant – she hadn’t felt empowered to insist that her boyfriend, who was five years older, should use a condom.

Terrified of her family’s reaction, she walked for 30 minutes to the nearest clinic for a pregnancy test. Instead of providing her with information and support, the nurses scolded her for getting pregnant so young and unmarried.

Shocked and upset, Gloria left the clinic before completing all the tests and decided not to go back.

When she returned home, her boyfriend told her that he wasn’t ready for a child – he wanted her to have an abortion. Gloria’s response was, ‘I am also not ready for a baby but I can’t kill her. I have to protect her.’

She hasn’t heard from him since.

Gloria decided to go back to the clinic when a neighbour, seeing that she was pregnant, advised that she needed to take care of herself and her baby. She was eight months pregnant at the time.

The nurses shouted at her again. After taking an HIV test, Gloria tested positive. She was immediately placed on antiretroviral treatment to prevent the virus passing to her baby.

When Gloria went into labour, she had to hire a private car to be taken to the clinic. Upon arrival, it was decided that she would need to give birth at the closest hospital in Piet Retief, 46km away.

As there is no permanent ambulance station in Amsterdam, Gloria had to wait for one to arrive.

An hour later, Gloria was taken to the hospital to give birth – alone.

When she got to the hospital, she was left in a room for several hours with no pain relief medicine or initial check-up.

Several hours later, after experiencing contractions and an overwhelming urge to push, Gloria went looking for a nurse who told her to go to the toilet.

Gloria refused, insisting that she should push. The nurse eventually told her to lie down and checked her – the baby’s head was showing.

Gloria and her new daughter stayed in hospital overnight. The next morning she walked 45 minutes to the taxi rank, followed by another 30-minute walk to get home.

Gloria’s story is not unique but it’s far from the worst. Without proper medical care during pregnancy, women and girls lives are being put at risk.

The maternal mortality rate has more than doubled in the district, and teenage pregnancies are well above the average.

In January 2015, Amsterdam Clinic in Mkhondo Municipality increased the frequency of their antenatal care services from two days a week to seven.

Women and girls living in the area can now access these vital services more easily and with drastically reduced waiting times.

This is great news for women in employment as they no longer need to take time off work to attend the clinic.

While we welcome this excellent news, there's still more to be done. We’re calling on the South African government to improve healthcare services for girls and women in Mkhondo Municipality.

We’re also asking them to: