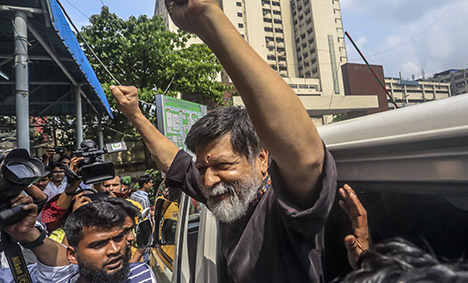 Thanks so much to all those who took action to free Shahidul Alam. After spending over 100 days in prison, he was released on 20 November 2018, five days after the High Court granted him permanent bail. This means that now he cannot be imprisoned without a court order.

'It’s tremendous to, in some way, be able to connect with you because all of you across the globe, particularly the members of Amnesty who have played such an important and crucial role in facilitating this, but also in creating the pressure that led to my release.'
Shahidul Alam

Shahidul was arrested in Dhaka on 5 August 2018. The next day he was charged for violating a draconian law, carrying a maximum 14 years in prison.

Shahidul has been arrested and charged under Section 57 of Bangladesh’s Information and Communication Technology Act (ICT) after giving an interview to Al Jazeera on the current wave of student protests in Bangladesh against unsafe roads.

Section 57 is a vague and broadly worded law that may be used to prosecute anyone who publishes digital content that is:

Section 57 has been used to silence scores of people since it was introduced in 2006. As of April 2018 1,271 charges had been made by the police under this law.

Police do not need arrest warrants or official permission to prosecute. Those accused are mostly denied bail pending their trial and kept locked up for months with no official verdict. Shahidul himself was denied bail on 10 September 2018.

Those arrested are often journalists who’ve published articles criticising the government. Shahidul is well known for opposing the powers that be using his wide online influence through social media and his website.

But the crackdown has been even broader, to the point of absurdity. One former Bangladeshi army officer was arrested just for criticising the prime minister’s clothes.