Rise Up programme - one year on 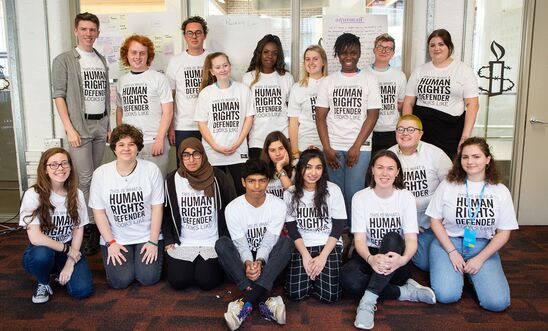 A year has passed since the first group of Rise Up participants congregated in London to kick off the one year training programme supported by The Co-operative Bank.

Rise Up offers 16-24 year olds key campaigning skills to turn their passions into activism. Whether it's advocacy, communications or leadership, Amnesty UK's campaigners and educators are on hand to help young people create change.

A community of activists

Over a series of four weekends the group were immersed in different areas of activism. We were able to have three of the sessions in person before COVID moved us online. You can hear more about taking part in the programme in Dionne's blog post here.

Working closely with the group, it was clear how much of an impact the programme has had. Beyond the skills and knowledge they have developed, there is a real sense of community which has proven to be invaluable.

“Beforehand, I wouldn’t consider myself as an activist, because I didn’t think I was worthy enough or capable. But being in an area where there’s loads of people just like me, doing similar things, who are willing to listen to my ideas was really nice.”  Participant 2019/20

'Rise Up taught me everything'

With the world changing at such break neck speed, it is vital to find comfort in our shared values and to stay motivated by our visions. It has been humbling to see how participants have adapted, persevered and known when to put self-care first this year.

One of the participants took a huge first step in organising a local Black Lives Matter protest in her local town, overnight she had response from over 200 people. Her campaigning has rapidly taken off having done media interviews with the Guardian, established a social media presence and now organised numerous protests. She has an active base of supporters in her community and is now leading the BLM movement in the area.

“I feel we’ve made an impact. We’ve had regular meetings with Essex Police who asked what they can do to help and we have been told that since the first protest there has been a drop in the number of BAME people stopped and searched in Colchester. The way the system works has to change...People are listening and I’m hopeful because people my age and younger are finally using their voices.” participant 2019/20

This is just one example of how the young participants have taken the skills they learnt in Rise Up and put them into practice. Others are working with local schools to decolonise the curriculum, standing up for protection of journalists and finding ways to increase the engagement of young people with politics.

There is an unwavering commitment to the changes that they want to see in the world and Rise Up has created a space for participants to explore what their place is bringing about these changes. We all greatly look forward to seeing where their campaigning will take them, and to stand in solidarity with this group of impressive young activists fighting for change.

“I’ve taken the first step, done it from Rise Up! It taught me everything” participant 2019/20

Rise Up is supported by: