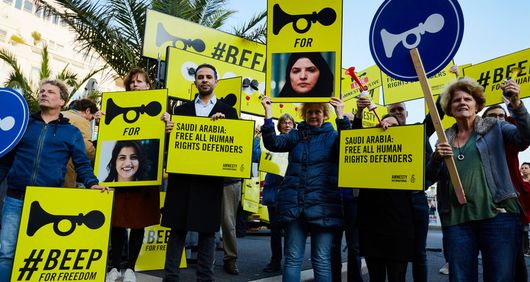 11 Saudi women activists on trial before the Criminal Court in Riyadh risk being sentenced to prison terms on charges related to their activism. Many of them have campaigned against the long-standing ban on women driving in Saudi Arabia, and the end of the male guardianship system. While seven of the activists were temporarily and conditionally released, four others remain in detention. The 11 women remain at risk of receiving prison sentences.

The 11 Saudi women activists have been detained since May 2018, following a sweeping wave of arrests targeting human rights activists. Many of the women activists brought to trial have campaigned against the long-standing ban on women driving in Saudi Arabia, and for the end of the male guardianship system.

Since May 2018, at least 15 activists have been detained without charges in Saudi Arabia. On 19 May, the Saudi Press Agency reported that seven individuals had been arrested for their “suspicious contact with foreign entities”, “recruiting people working in sensitive government positions”, and “providing financial support to hostile entities abroad with the aim of undermining the security and stability of the Kingdom and shaking the country’s social fabric”. Among those targeted are prominent women human rights defenders Loujain al-Hathloul, Iman al-Nafjan and Aziza al-Yousef

In November 2018, reports emerged that several activists, including several women arbitrarily detained since May 2018, were reportedly tortured, subjected to sexual violence and otherwise ill-treated during the first three months of their detention. (See Press Release: Saudi Arabia: Reports of torture and sexual harassment of detained activist).