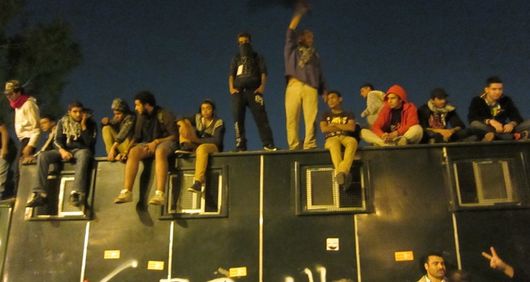 On 26 November 2019, plainclothes police officers arbitrarily arrested journalists, Solafa Magdy, Hossam el-Sayed and Mohamed Salah, from a cafe in Dokki, Cairo. They confiscated their mobile phones, laptops and car. A day after, State Security prosecutors detained Solafa and Mohamed, pending investigation on charges of “joining a terrorist group” and “spreading false news”, while Hossam was accused of “membership in a terrorist group.” In detention, NSA officers beat Solafa on her right arm and side for refusing to give them access to her mobile. The prosecutor renewed their detention for 15 days pending investigations.

On 20 and 21 September 2019, protests broke out across Egypt, calling on President al-Sisi to resign.The protests were triggered by videos published on social media by a former army contractor who accused army leaders and the president of wasting public money to build luxury properties.

Since President al-Sisi came to power, the authorities have arbitrarily blocked at least 515 websites, raided and/or closed the offices of at least eight media outlets and arbitrarily detained scores of journalists. We are aware of at least 37 journalists currently detained since 2014. Among them, at least 20 journalists, who were arrested and detained solely for carrying out their work, including conducting field work, publishing a story or interview, or covering anti-government protests.

Solafa Magdy, Hossam el-Sayed and Mohamed Salah are freelance journalists working for different media outlets. Solafa and Hossam are married and have a seven-year-old son. Amnesty International believes that their detention is based solely on their writings and social media activism, defending prisoners of conscience and victims of human rights violations.

The arrests of Solafa, Hossam and Mohamed follow the post-September protest crackdown, the largest crackdown against dissenting voices since 2014; and just two days after the raid of independent media website, Mada Masr, and the brief detention of four of their journalists.

According to Egyptian human rights lawyers, the authorities have arrested at least 4000 individuals in relation to their perceived participation or support of the protests. The authorities ordered the pre-trial detention of at least 3,715, pending investigations over “terrorism” charges in the largest single protests-related criminal investigation in Egypt’s history.

PLEASE TAKE ACTION until 29 January 2020
Please write using your own words or the template letter provided in the attached documents, in Arabic, English, or your own language, to the listed address as soon as possible.