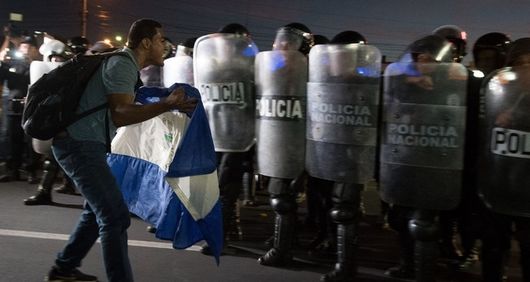 Activists known as “Aguadores” were released on 30 December but still face charges. Their trial was scheduled for 30 January but got postponed and has yet to take place. As of 27 February 2020, at least 61 people remained in detention for reasons related to the 2018 protests. We will continue to explore actions to ensure that the activists’ charges are dropped and seek the release of other people still in prison.

On 18 April 2018, a series of reforms to the social security system in Nicaragua sparked an outbreak of social protests. These protests were met with violent repression. The crisis resulted in 328 people dead, more than 2,000 people injured, and hundreds arrested. In March 2019, the government made a commitment to release all people detained solely for exercising their right to freedom of expression and peaceful assembly but have failed to fulfil it. The National Assembly passed an Amnesty Law on 8 June 2019, that included these prisoners, but local groups estimate that to date at least 61 such detainees remain in prison.

On 14 November 2019, the Nicaraguan police detained and imprisoned 16 activists as they left the San Miguel Parish Church in Masaya (Nicaragua). The activists were giving water to a group of people on hunger strike demanding the release of their relatives detained for participating in the protests. On 30 December 2019, the 16 activists arrested were among a group of 91 people released by the government. However, they still face charges. At present writing, new hearings on the case had not taken place.
According to local organizations, they weren’t formally notified about the suspension of this hearing.

The public campaign on behalf of people jailed in the aftermath of the April 2018 crisis, including appeals sent by Amnesty International members, contributed to positive developments on the case. Amnesty International continues to monitor the situation and will work with local organizations to ensure that all people detained for exercising their basic rights since the beginning of the crisis are immediately released and all charges against them dropped.