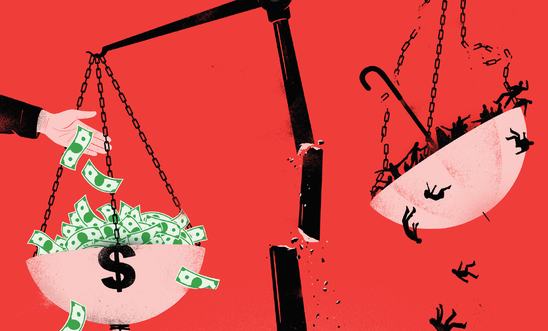 Human rights are hardly figuring in the calculations of the world's biggest funders of new companies © Sebastien Thibault/agoodson.com

All but one of the world’s largest venture capital firms have failed to put in place robust human rights due diligence policies, Amnesty International revealed today in a landmark new report.

In the first comprehensive report on the human rights responsibilities of venture capitalists, Amnesty examined all the firms on the Venture Capital Journal’s list of the 50 largest VC firms, as well as three leading tech accelerators (Y Combinator, 500 Startups and TechStars).

These comprise 41 companies based in the USA, six in Europe (including France, Germany, Sweden, Switzerland and the UK), and six in China. Amnesty reviewed publicly-available information on each venture capital firm’s human rights due diligence processes, and sent letters to the firms requesting additional information.

Amnesty’s 49-page report - Risky Business: how leading venture capital firms ignore human rights when investing in technology - found that none of the ten largest companies - which together have raised nearly £60 billion during the last five years - had adequate human rights due diligence policies in place.

Eight of the top ten companies - New Enterprise Associates, Tiger Global Management, Sequoia Capital, Lightspeed Venture Partners, Andreessen Horowitz, Accel, Index Venture Partners and General Catalyst - showed no evidence that they even checked whether their investments could be linked to human rights abuses. The other two firms (Insight Partners and Norwest Venture Partners) do conduct some human rights due diligence, although not to the standards set out in the UN Guiding Principles on Business and Human Rights.

Overall, of the 50 venture capital firms and three tech accelerators examined, Amnesty found that only a single company (Atomico) had due diligence processes in place that potentially meet standards outlined in the UN Guiding Principles.

Amnesty’s research highlights the fact that venture capital firms fund companies whose products are sold to repressive governments and cause or contribute to human rights abuses. For example, venture capital-backed technology companies provide spyware equipment to the Chinese government, forming part of the dystopian surveillance infrastructure used to monitor the persecuted Uighur population in Xinjiang.

“Our research has revealed that the vast majority of the world’s most influential venture capitalist firms operate with little to no consideration of the human rights impact of their decisions.

“A lack of human rights due diligence means venture capitalists are turning a blind eye to whether their investments are contributing to human rights violations.

“VC firms cannot act like they are above the law. Like all companies, they have a responsibility to carry out due diligence in order to identify, prevent and mitigate any adverse human rights impacts of their investments.

“The stakes could not be higher - these investment titans hold the purse strings for the technologies of tomorrow, and with it the future shape of our societies.

“Venture capitalists ultimately get to decide which start-ups will grow to become the next Google or Facebook. If we want to ensure that tomorrow’s leading tech companies and technologies support our human rights, we need to act today.”

A recent US survey found that women comprise only 23% of venture capital investment professionals, while 65% of firms did not have a single female investment partner. This lack of representation has a direct impact on start-up investment - in 2018, all-female founding teams received just 2% of US-based venture funding.

“This glaring lack of diversity means new frontier technologies are being largely funded and built by white men, without an understanding of the broader impact of their technologies. VC firms urgently need more women and minority groups in decision-making roles and should publicly commit to hiring more diverse teams.”