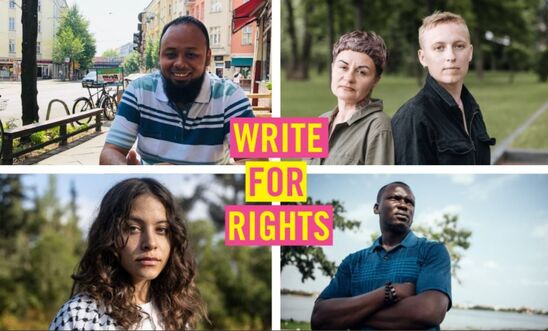 Millions of letters, emails and texts will be sent to support people who have been jailed, attacked or disappeared

People across the UK can join to help activists facing abuses, including:

Amnesty International has launched its flagship annual letter-writing campaign, Write for Rights to support 10 activists from around the world who have been attacked, jailed, harassed or disappeared for standing up for their rights.

Amnesty is calling on members of the public to join the global action which will take place between November and December. People around the world will send millions of cards, emails and tweets of solidarity to individuals or groups of people whose freedoms are being denied, and will write letters putting pressure on those in power to stop the abuses being committed against them.

This year, Write for Rights - which is funded by players of the People’s Postcode Lottery - will be supporting ten individuals, including:

“These individuals have been thrown behind bars, attacked, harassed or disappeared just for standing up for their rights. By coming together, people around the world have the power to raise their profile and increase their chances of protection or release.

“Sending a letter or email might seem like a small act, but when sent in their thousands they can have a huge impact. People in power are forced to listen.

“The Write for Rights campaign - which has been made possible with funding from the players of the People’s Postcode Lottery - changes the lives of oppressed people every year. We hope to see many people across the UK getting involved to make as big a noise as possible about the injustices these individuals are facing.”

Write for Rights goes back to the very roots of Amnesty International, which was founded in 1961, with Amnesty’s early campaigners writing letters of support to those affected by human rights abuses, as well as letters of concern to governments around the world.