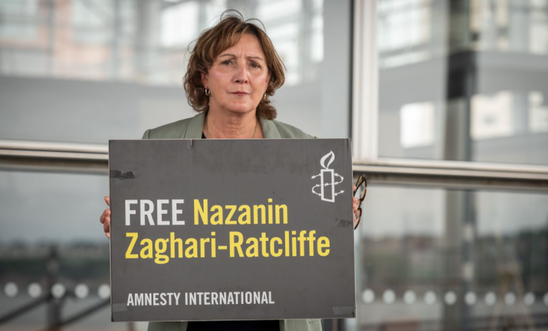 Janet Finch-Saunders, MS for Aberconwy, outside the Senedd © Natasha Hirst

Women Senedd Members from all elected parties have come together with members of the Cardiff Amnesty Group to support the UK national Nazanin Zaghari-Ratcliffe who is still arbitrarily detained in Iran.

On the steps of the Senedd, members held a giant “Chain of care”, made by the Cardiff Amnesty Group and the Free Nazanin campaign in 2019. The knitted chain - 500 metres long (nearly ten times the height of Nelson’s Column), with 2,810 links and a mind-boggling 3,343,900 stitches - has been created from knitting items donated by Amnesty supporters across the country.

“Five years ago this June, we were here on the steps of the Senedd for our first vigil for Nazanin in Wales. It was where we first met members of the Cardiff Amnesty Group.

“Little did we know back then that after five gruelling years we’d be here again, still campaigning for her freedom. But here we are, and it is wonderful to see so many female members of Senedd - from across the political spectrum - holding up the ‘Chain of care’.

“This heart-warming display of Welsh political support means so much to Nazanin and our family. We are so touched.”

“Women members from across the political spectrum stand in solidarity with Nazanin, appreciating the anguish of being parted from her daughter at such a formative time in a child’s life.

“We need to keep up the pressure on the UK government to end this injustice.”

Lauren Caley, chair of the Cardiff Amnesty Group, which has campaigned for the release of Zaghari-Ratcliffe and other UK-Iranian dual-nationals arbitrarily detained in Iran, said:

“It was wonderful to see Welsh politicians stand together in support of Nazanin and call for her release.

“Nazanin should have returned to her family in the UK in March this year when her initial wrongful sentence ended, and we will continue to campaign for her freedom until this injustice ceases and she’s back home.”