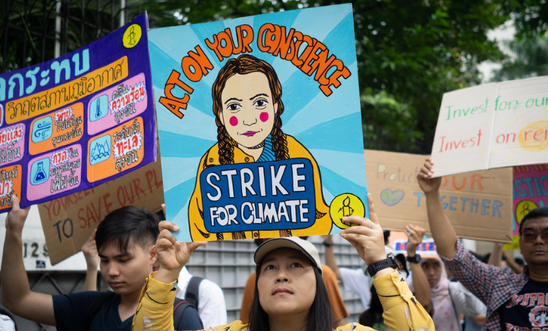 A climate strike in Thailand earlier this year © Amnesty International

Millions of lives at risk, yet US president appears to be pursuing ‘personal agenda’ of promoting fossil fuels for domestic votes

‘He is wilfully vandalising global attempts to save humanity’ - Kumi Naidoo

Responding to news that Donald Trump has initiated the formal withdrawal of the United States from the Paris Agreement on climate change - a move which would make the US the only country in the world not part of the pact - Kumi Naidoo, Amnesty International’s Secretary General, said:

“Selfish, reckless and monstrous - the continued attempts to pull the US out of the Paris Agreement is potentially the single most destructive act of the Trump presidency.

“President Trump may believe his commitment to fossil fuels will win him votes, but it will also cost lives. By putting his own personal agenda before the needs of the world’s population, he is wilfully vandalising global attempts to save humanity.

“The climate emergency is one of the greatest threats to human rights of our age - its effects wreaking famine, poverty and homelessness on great swathes of the globe.

“And as the world’s second-biggest carbon-emitter, the US has a pivotal role to play in preventing the human rights catastrophe that will be inevitable unless greenhouse gas emissions are drastically reduced.

“By pursuing an exit of the Paris Agreement, President Trump is sending a clear message to the hundreds of millions of people whose existence is threatened by the climate crisis: he doesn’t care whether they live or die.”

President Trump is beginning a year-long process to formally withdraw from the Paris climate agreement. He will not be able to finalise the withdrawal until a day after the US presidential election in November 2020.

The agreement, which entered into force in November 2016, is the world’s most ambitious climate change commitment, ratified by 125 countries. Under it, the US had committed to reduce emissions to 26-28% below 2005 levels by 2025.

Without strong action to prevent it, severe climate change is expected to cause 250,000 deaths per year between 2030 and 2050 - due to malaria, malnutrition, diarrhoea and heat stress. More than one billion people will see a severe reduction in water resources if there is a 2°C rise in the mean global temperature. There would also be an increase in the number of people at risk of hunger of at least 600 million by 2080, with at least 330 million displaced through flooding.

Overall, hundreds of millions of people would be denied their rights to life, health, food, water and housing. The adverse effects are likely to be disproportionately experienced by those living in poverty, particularly women and girls, indigenous peoples and others disadvantaged due to discrimination.