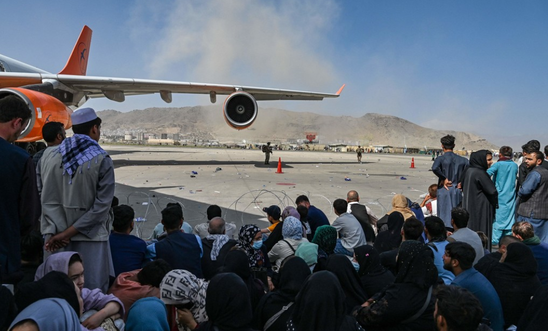 ‘The US helped create and perpetuate this crisis’ - Paul O’Brien

Ten leading human rights organisations have signed an open letter calling on US President Joe Biden to urgently do more to evacuate vulnerable people from Afghanistan.

The letter’s signatories - including Amnesty International, Human Rights First, Human Rights Watch and Freedom House - say they are “deeply troubled” that the ongoing approach to rescue efforts “risks jeopardising the lives of thousands of Afghans”.

“Under current conditions”, note the groups, the USA is not on track to evacuate many of those it can bring out of the country.

“It is indisputable that the US helped create and perpetuate this crisis.

“For two decades, the US government poured trillions of dollars into the longest war in US history and committed human rights violations along the way.

“And today, the Biden administration is failing to account for its own role in creating this humanitarian catastrophe.

“The United States has a responsibility to act now for the thousands of Afghans whose lives are at risk - before it’s too late.”

The security environment surrounding Kabul’s Hamid Karzai International Airport remains unstable, preventing many Afghan and international civilians from safely arriving for their evacuation flights. There are credible reports of people being beaten by Taliban fighters as they seek to flee the city. Even if the evacuation operation were to reach the US administration’s stated target of airlifting between 5,000 and 9,000 people per day, many of those whose lives are at risk are unlikely to be able to leave.

Given these conditions, the ten human rights organisations are calling on the White House to:

•    Plan for US forces to remain on the ground until the most vulnerable Afghans are safely out of the country, including after 31 August.

•    Work with partners and allies to assist in the safe passage to the airport for those seeking to depart.

•    Work with partners and allies so that the airport itself remains safe, operational and supplied with the infrastructure necessary to support departing Afghan and foreign nationals.

•    Work with civil society groups, non-governmental organisations and the private sector to increase capacity and coordination of evacuation efforts beyond the originally-stated goal of 5,000-9,000 people per day.

•    Take all feasible measures to ensure that all flights leaving Afghanistan are full.

The human rights organisations warned that failure to take these actions will seriously heighten the risk to the lives of thousands of people.