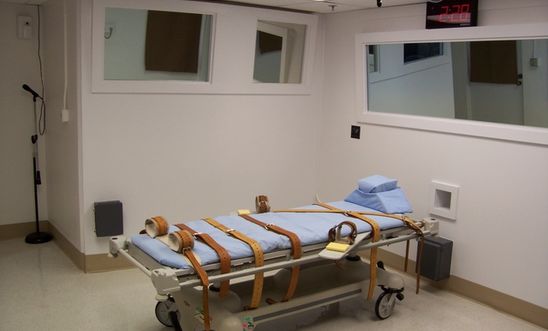 A lethal injection gurney in Florida © Florida Department of Corrections

The US state of Florida’s aggressive response to a key Supreme Court ruling on the use of the death penalty has denied death row inmates justice, Amnesty International said in a new report today.

Amnesty's 74-page report - Darkness in the Sunshine State: The death penalty in Florida - shows how some of Florida’s death row inmates have been denied the chance of a vital review of their death sentences.

In a 2016 ruling - Hurst v. Florida - the US Supreme Court overturned Florida's capital sentencing statute because it gave juries only an advisory role in death sentencing.

However, instead of responding with a serious reassessment of its capital justice system, Florida’s legislature revised its statute to allow death sentencing to resume. Florida’s Supreme Court has since made the Hurst ruling apply only to a limited group of existing cases, meaning only about half of the nearly 400 people then on death row were entitled to new sentencing hearings. Four people deemed to fall on the wrong side of that "cut-off" have already been put to death, with scores more awaiting execution.

Amnesty's report provides examples of the arbitrary nature of this time cut-off and focuses particularly on three main categories of death row prisoners: individuals with serious mental disability, those assessed with actual or borderline intellectual disability, and young adults deemed to have mental maturity lower than 18-year-olds and backgrounds of severe deprivation and abuse.

"While several US states have embraced abolition in recent years, Florida remains a diehard proponent of the death penalty and one of a handful of states that account for the bulk of executions in the USA.

"Despite its capital sentencing law being found unconstitutional two years ago, Florida still has the second-largest death row in the country. Its response to that ruling has been to dig in and defend the indefensible, including the execution of people with mental and intellectual disabilities.

"Two wrongs don’t make a right. The death penalty is no way to impart justice.

"Florida and all other states where the death penalty is still in use must impose immediate moratoriums on executions until they can end this cruel practice once and for all."

Matthew Marshall is on death row in Florida for a murder committed in 1988 when he was 24-years-old. The jury voted unanimously for life imprisonment, but the judge overruled their decision, sentencing Marshall to death. Even though such "overrides" are now prohibited in Florida following the Hurst ruling, Marshall has been deemed ineligible for a retrospective review of his case.

Tony Watts was sentenced to death in Florida in 1989 and has spent almost half of the years since then in a prison psychiatric hospital because of his severe mental disability. The state, though, continues to defend his death sentence rather than commute it.

Joe Elton Nixon has been on death row in Florida for more than three decades. Twenty-two years old at the time of the crime, he has his 57th birthday today. He was sentenced to death in July 1985 on the advisory recommendation of a divided jury. He has been deemed not to be entitled to relief under Hurst because the timing of his case leaves him on the wrong side of the Florida Supreme Court’s arbitrary Hurst framework. Among other things, there is compelling evidence that mental disability rendered him incompetent to stand trial, that intellectual disability renders his death sentence unconstitutional, and that the prosecution withheld impeachment evidence about two of its key witnesses. Nixon is African-American and was sentenced to death for the 1984 murder of Jeanne Bickner, a white woman.

Not limited to 'worst of the worst'

Even before the Hurst ruling, two US Supreme Court Justices - Justice Stephen Breyer and Justice Ruth Bader Ginsburg - had argued that the time had come to revisit the constitutionality of the death penalty, given the wide evidence of error and arbitrariness. The death penalty’s constitutionality, they argued, hinged on it being limited to the “worst of the worst”, that is “those who commit a narrow category of the most serious crimes and whose extreme culpability makes them the most deserving of execution”. It was not being so limited, they argued, pointing to race, geography and other factors as improper influences on capital outcomes, rather than the severity of offence. Florida epitomises their concerns.

Amnesty's report also highlights how race influences the use of the death penalty in Florida. Twenty of the state’s 96 executions since 1976 were of black defendants convicted of killing white victims, but no white person has ever been executed solely for killing a black person in Florida. Despite this imbalance, it remains almost impossible for the those under sentence of death to mount a successful claim of systemic racial discrimination in the state.

Rapid pace of executions in Florida

Florida is ranked fourth in the number of executions carried out by US states since 1976 (when the US Supreme Court approved new capital laws), having carried out 94 executions in that time (behind Texas, Virginia and Oklahoma). However, since 2010, Florida has carried out 28 executions, while Virginia and Oklahoma have carried out 29 between them. If things continue at this pace, Florida could soon be the second most frequent user of capital punishment. Florida also has the second-largest death row of any state in America (behind only California), with 374 people currently on death row. It also has the highest number of wrongful convictions in death penalty cases.

Amnesty opposes the death penalty unconditionally in all circumstances. The organisation calls on Florida’s Governor Rick Scott and his Cabinet to stop signing death warrants and commute the death sentences of all those on death row, as first vital steps towards abolition. At a minimum, the authorities should ensure that all judges and juries are made fully aware of the mitigating evidence surrounding mental and intellectual disabilities, emotional and psychological immaturity, or backgrounds of abuse and deprivation.